The bill will pay tribute to Viola Desmond, who was dragged out of the Roseland Theatre by police, arrested, thrown in jail for 12 hours and fined on Nov. 8, 1946 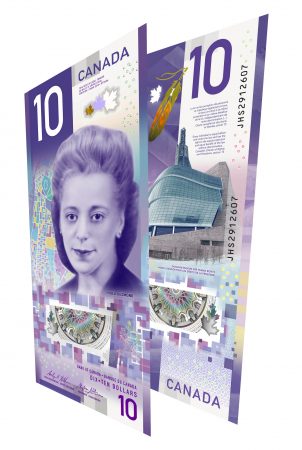 HALIFAX – A new $10 banknote featuring Viola Desmond’s portrait will go into circulation in a week, just over 72 years after she was ousted from the whites-only section of a movie theatre in New Glasgow, N.S.

The civil rights pioneer and businesswoman is the first Canadian woman to be featured on a regularly circulating banknote, which will also show a map of Halifax’s historic north end, home to one of Canada’s oldest black communities and the site where Desmond opened her first salon.

Irvine Carvery, a prominent member of Halifax’s north end and a former school board chair, said he’s excited that the bill will pay tribute to her, describing the inclusion of a black woman on the note as “a historic moment.”

“What it means is that there’s recognition in terms of the struggle that we, as African Canadians have gone through for all of our years of being here,” he said.

“That was a pinnacle event, down in New Glasgow, when she refused to give up her seat. So to put her on the bill is, for me, a recognition that those struggles were real, and they continue through to today.”

Carvery, 65, lives a stone’s throw from Desmond’s childhood home in north end Halifax and hopes to eventually see a commemorative marker on the house.

On Nov. 8, 1946 – nearly a decade before Rosa Parks refused to give up her seat on a segregated bus in Alabama – Desmond was dragged out of the Roseland Theatre by police, arrested, thrown in jail for 12 hours and fined.

It would take 63 years for Nova Scotia to issue Desmond, who died in 1965, a posthumous apology and pardon.

Carvery said he hopes the new bill will inspire young girls to pursue their dreams and push back against injustice, adding that he believes it will raise awareness for who Desmond was and what she accomplished.

“I’m hoping having Viola on the bill will prompt people to want to know what’s the story behind her, because still, there’s a lot of people who have no idea who she was and what she stands for,” he said.

“Being on the $10 bill, people might want to say, ‘who is that person? Let me do a little research.”’

Desmond was selected to be on the bill after an open call for nominations and a public opinion survey on the Bank of Canada website.

The map shown behind Desmond’s portrait includes the stretch of Gottingen Street, the city’s north end’s main drag, where the beautician opened a salon as part of a business that would eventually expand into her own line of cosmetics and a beauty school, which allowed her to mentor black women from across the country.

Her sister, Wanda Robson, has said that Desmond fought to overcome the many obstacles in her path to pursue her career: training as a beautician in Montreal, Atlantic City and New York when she was unable to study in Halifax because of the colour of her skin.

The new bill was first unveiled in Halifax on March 8 – International Women’s Day – by Finance Minister Bill Morneau and Bank of Canada Governor Stephen Poloz during a ceremony at the Halifax Central Library.

At the time, the Bank of Canada said in its materials on the new banknote that the community where Desmond lived and worked “served as a source of invaluable support during her struggle for justice.”

They said the $10 bill will also be the first vertically oriented banknote in Canada, which would allow for a more prominent image of Desmond and differentiate it from the current polymer notes.

The note also includes a picture of the Canadian Museum for Human Rights, an excerpt from the Canadian Charter of Rights and Freedoms, and an eagle feather, which the Bank of Canada said represents the “ongoing journey toward recognizing rights and freedoms for Indigenous Peoples in Canada.”

The new $10 bill comes in a series of posthumous accolades for Desmond in recent years: in June, a Canada’s Walk of Fame star was unveiled for her at the Halifax Ferry Terminal.

And in 2016, a new Halifax harbour ferry was named for Desmond following an online contest.