Singh hopes to raise incentives for zero-emission vehicles to $15,000 from $5,000 as long as the car is manufactured in Canada 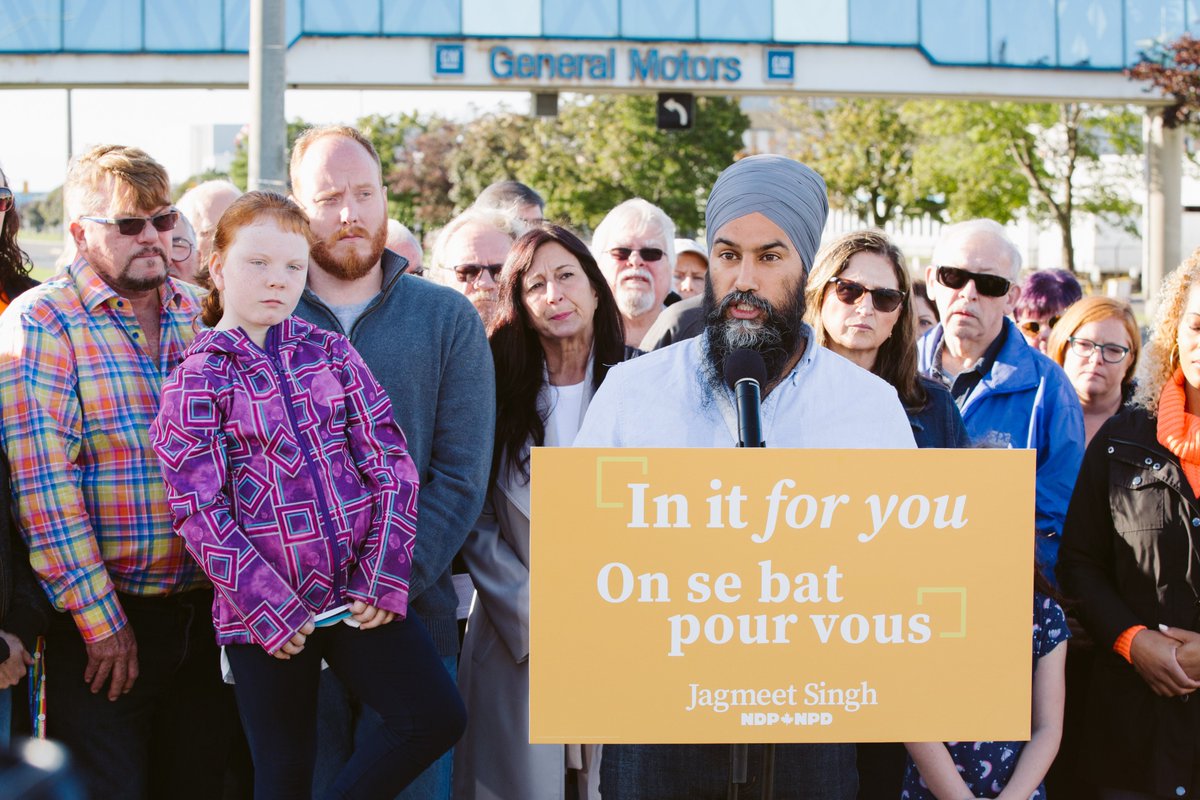 The NDP’s Jagmeet Singh chose GM’s Oshawa, Ont., plant as a backdrop to the start of his campaign on Day 4 of the election campaign.

Singh announced the New Democrats would roll out a National Automotive Stategy, which would include a $300 million Auto Innovation Fund, updating government fleets to Canadian-made zero-emissions vehicles and shifting consumer incentives to made-in-Canada vehicles only.

But there are strings attached.

He said his government wants to ensure that there would be an incentive to buy “Made in Canada.”

The NDP wants to continue Ottawa’s incentive to buy zero-emissions vehicles, but wants to increase that incentive to $15,000 from $5,000, and ensure that the incentive applies only to Made in Canada vehicles. That incentive would, for example, apply to buying government fleets with public dollars.

The GM Oshawa plant is an example of bad choices governments have made “to benefit the people at the top and make life easier for the wealthiest. It’s meant that workers have paid the price,” Singh said.

He said while GM’s Oshawa plant experienced job losses, independent auto-part suppliers have been impacted, too. “For every job impacted at GM there are a multitude of jobs impacted because of the supply chain,” Singh said.

What – by your definition and in the context of NAFTA and the automation industry – is a Canadian-made car?

Singh: We’re gonna make sure there is Canadian content. That’s assembly. That’s manufacturing done here in Canada. What we’ve seen in terms of the failure is when there’s been incentives given. When there has been money given to companies to encourage them to stay in Canada, there hasn’t been any strings attached. I really want to focus in on that. There’s been billions of dollars given to the automotive sector. But those investments were not associated with strings attached as to keeping jobs in Canada. There were no repercussions for companies that received money and had to walk away without any investments remaining in Canada. We want to end that. So, with reintroducing the automation innovation strategy that existed before, we’re going to ensure that any investments made require jobs to be here in Canada. In terms of the percentage of the content, that’s less of a concern. It’s jobs that are built here have to remain in Canada.

What are these strings? We’re missing some specifics.

Singh: When a car is assembled in Canada, it puts people to work in Canada. It’s Canadian content. Cars that are built here in Oshawa would qualify as Made in Canada – they’re assembled here, there’s a whole fleet of cars. That would be the definition. There’s a plant in Brampton that puts together and assembles cars in Canada. That would satisfy the definition…

How soon can you implement this innovation plan? Could this plan actually help save jobs if you form a government on October 21?

Singh: On the Auto Innovation Fund, it used to exist. All of the structures are there. We can bring it immediately in place. An NDP government will immediately bring back the automotive innovation strategy and tie in that strings-attached clause, that if there’s investments made, the jobs have to stay in Canada.

Question: How do you know the zero-emissions incentive would be enough for manufacturers to set up in Canada and bring work here?

Singh: A $15,000 incentive is a significant push. We know that a $5,000 incentive is working. That’s encouraging consumers to go towards electric vehicles. We’re confident a $15,000 investment will certainly work. And if it incentiviszes people to buy vehicles, manufacturers will know there’s a base to buy that vehicle. It will encourage [manufacturers] to set up shop in Canada, to build those vehicles of the future and make sure people have a job.