Newly-appointed chief of Nalcor Energy said the project was "too big for our needs," but added that he expects work on the dam to "finish strong" 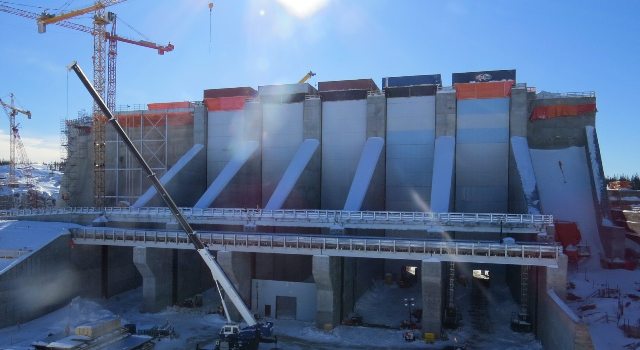 The estimated cost of the hydro megaproject now tops $11.4 billion, up drastically from the original $7.4 billion estimate. PHOTO: Nalcore Energy

That’s up from an original estimate of $7.4 billion—including the cost of borrowing—when the development was sanctioned in 2012.

First power from the dam and hydro station under construction on the lower Churchill River was expected next year.

But Nalcor Energy CEO Stan Marshall now says first power is delayed until the fall of 2019.

“In my opinion the Muskrat Falls project was not the right choice,” Marshall told a news conference June 24.

Still, he said he expects the project will “finish strong.”

Full power from Muskrat Falls to the island of Newfoundland and on to Nova Scotia through subsea cables is expected in mid-2020.

He also says some contractors lacked experience working in harsh environments and that early execution by some “was poor.”

About $6.7 billion has been spent or is already committed to the project.

Marshall says most problems stem from construction of the power plant. He says Nalcor is in “a major dispute” with construction contractor Astaldi Canada. He said it’s the major uncertainty for Muskrat Falls but that talks continue.

Marshall says electricity rates for domestic customers are now expected to rise to 21.4 cents per kilowatt hour in 2021, before tax. That’s up 6.3 cents from forecasts when the project was sanctioned in 2012.

Sales of available export power would bring those estimates down by less than a cent, Marshall predicted.

Consumers in the province paid about 12 cents per kilowatt hour last year before tax. That compares to almost 15 cents in Ontario and 16 cents in Nova Scotia.

Marshall says forecasted energy needs have decreased, but the province still needs a new source of power to replace the aging Holyrood plant and to meet future demand.

He predicts by the time Muskrat Falls comes onstream, consumers in the province will be paying among the highest rates in the country.

Still, Marshall—who took over just two months ago as CEO of the project, which was sanctioned by the former PC government—says it’s too late to turn back.

“It was a gamble,” Marshall said of energy price assumptions made when the project was approved.

“And it has gone against us.”

The province is obligated to provide power to Nova Scotia utility Emera for 35 years. Nixing Muskrat Falls and myriad contracts would be far more expensive than forging ahead, he said.

“The project was too big for our needs,” says Marshall. “We speculated, and we lost.”


Related Stories
Nova Scotia to pay ‘next to nothing’ for energy from $11.6B Muskrat Falls project
Muskrat Falls: Cost of project jumps by $800M for Nalcor
Fresh trouble at Muskrat Falls as cost of hydro project approaches $12B
Muskrat Falls hydroelectric project cheaper than wind power: study