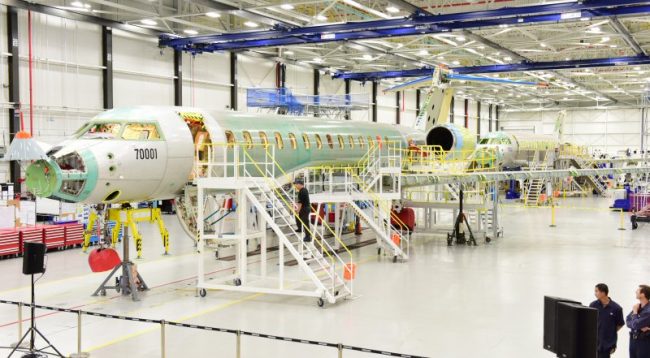 The company builds components for Bombardier’s Global 5000 and Global 6000 aircraft, which are assembled in Toronto along with the new Global 7000. PHOTO: Bombardier

The company, which is a subsidiary of Japanese conglomerate Mitsubishi Group, has set aside $36.2 million to buy new equipment and upgrade its Mississauga site to support two Bombardier Inc. business jet programs.

“Ontario represents tremendous opportunities with its numerous advantages, such as cost-competitive solutions and talented workforce, so it was an easy decision to expand here,” Mike McCarthy, president and chairman of MHI Canada, said in a statement.

To support the multimillion-dollar company investment, the Ontario government committed $4.9 million to the expansion through its Jobs and Prosperity Fund.

The province said the scale-up project is directly related to Bombardier’s Global 5000 and Global 6000 aircraft programs—two Toronto-assembled business jets—but added that the expansion is expected to improve MHI Canada’s overall competitiveness as well.

The company plans to complete the project by 2021.