The rectangular-shaped coin shows three fishermen aboard a boat, staring at the ghostly image of a flying saucer near Shag Harbour 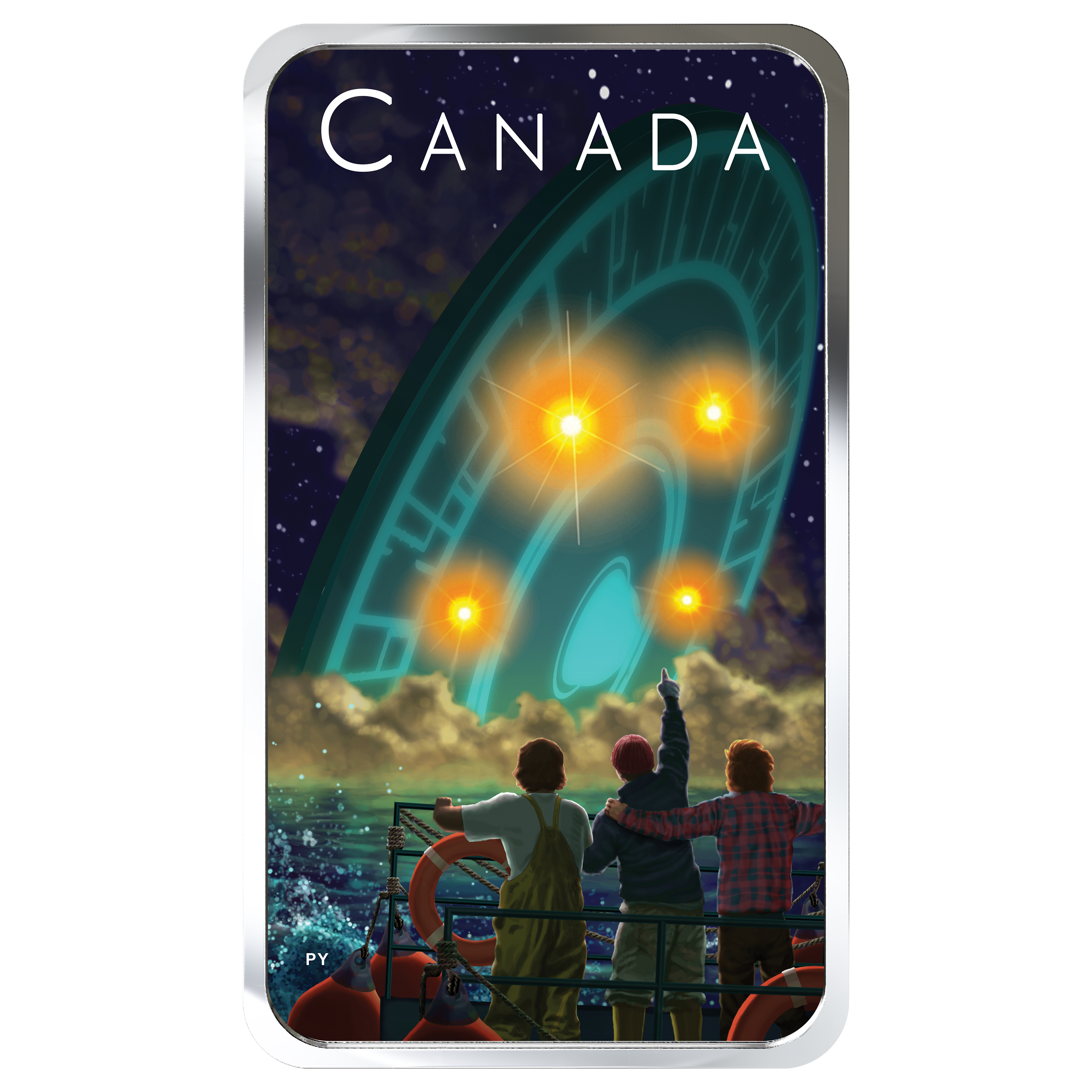 HALIFAX – The Royal Canadian Mint has issued a glow-in-the-dark coin that captures the eerie scene more than 50 years ago when awestruck witnesses reporting seeing what was officially documented as a UFO crash off southwestern Nova Scotia.

The colourful image on the rectangular-shaped coin shows three fishermen aboard a boat, staring and gesturing as the ghostly image of a flying saucer appears to plunge into the dark waters near Shag Harbour.

But something special happens when the included black-light flashlight is used to illuminate the coin in the dark: the spaceship disappears, but four orange lights remain in the sky, as described by those who reported seeing something that moonless night on Oct. 4, 1967.

“Our coins always aim to tell the whole spectrum of the Canadian experience, from serious topics – like our veterans in remembrance, our technical achievements and amazing landmarks – to the stories that really surprise you,” said mint spokesman Alex Reeves.

“We’re looking forward to doing more of this kind of stuff as we tell the story of Canada.”

The pure silver collectors coins went on sale Tuesday for $129.95 each. By the end of the day, the mint’s website said 95 per cent had been sold.

A total of 4,000 of the one-ounce coins will be produced, with some of them sent to dealers for retail sales. Considered non-circulating legal tender, each coin has a face value of $20.

The Shag Harbour incident is widely regarded as one of the world’s best-documented UFO cases.

Among the witnesses were RCMP officers, scores of fishermen and airline pilots flying at 33,000 feet along the Gulf of Maine.

Most reported seeing a series of flashing lights moving at high speed and then hitting the water, about 300 metres from shore.

At 11:20 p.m., a glowing, orange sphere – described as being about the size of a city bus – slipped beneath the surface without a sound, leaving behind a strange, orange foam.

A series of searches, including a three-day scan of the harbour’s floor, turned up nothing.

However, reams of police and military documents have since confirmed authorities had no idea what they were dealing with. There were specific references to unidentified flying objects, and no attempts were made to explain away what people had reported.

Subsequent theories have focused on Soviet submarines, experimental military aircraft from the United States and, of course, extraterrestrial beings.

“When we can take a really unique theme and a fantastic design, it’s a perfect marriage that resonates with Canadians.”

The decision to highlight what happened at Shag Harbour was made after collectors quickly bought up the first coin in the mint’s Unexplained Phenomena series.

In April 2018, the Crown Corporation released a colourful, egg-shaped collectors coin that depicts Stefan Michalak’s alleged close encounter with aliens near Falcon Lake, Man., in May 1967 – five months before the Shag Harbour sightings.

Michalak told authorities he was searching for precious metals in a park when he approached a silver, saucer-shaped craft that emitted a gas, setting his shirt on fire and leaving a distinctive burn pattern on his chest.

The Falcon Lake coin, which also glows under black light, shows Michalak laying on his back, his right arm stretched above his head as the spaceship hovers above him.