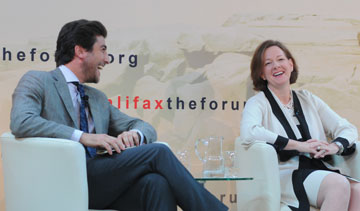 EDMONTON—Some of the findings in Alberta auditor general Merwan Saher’s review of former premier Alison Redford’s expenses and use of government aircraft:

The total bill: Saher found that from October 2012 to March 2014, Redford and her office staff spent $659,690 on travel, meals and hospitality. Redford took 247 flights on government aircraft during that time.

January trade mission to India and Switzerland: The published cost of the trip for Redford, her staff and other members of the legislature was $131,374. Saher found that, when costs for advance planning, security and other government employees who travelled were considered, the total cost was about $450,000.

Lots of receipts, but vague reasoning: The auditor found good compliance on submitting receipts, but reasons for expenses were sometimes vague such as “meeting” or “meeting in Edmonton.”

Party flights: Saher found Redford flew five times to government events where party-organized fundraisers, speeches or golf tournaments were also held on the same day. Three times, she flew to locations where only party-organized events were being held. The Progressive Conservative party has said it will pay $6,500 to cover off three flights to Tory events.

Personal flights: In March 2013, Redford, her daughter and a “special assistant to the premier” flew on a government plane to Vancouver for the funeral of Redford’s uncle. Saher said that once the decision to use the government plane was made, two meetings were set up for the premier. Redford refunded $184 for one night in a hotel and $1,440 for the value of two commercial air tickets. Saher also found that, in June 2013, Redford flew to the mountain town of Jasper with her daughter and an executive assistant for a weekend. She held three meetings with local officials at Jasper Park Lodge during that time.

Flights for her daughter: Redford’s daughter flew on the government plane 50 times between September 2011 and March 2014. On four occasions, she was accompanied by a friend and twice she flew without Redford. Saher “did not find any documented government reason for premier Redford’s daughter’s travel.”

Block booking of seats: The premier’s staff restricted access to other government members and staff on certain government flights. They would do this, he said, by entering false “place-holder” passengers (with names such as passenger 5 and passenger 6) to fill the flights and then removing them before the flight sheet was printed. Saher said the premier and her former chief of staff denied any knowledge of the practice. “However, based on our interviews, the idea for restricted access to the aircraft came from the office.”

South Africa: Almost $45,000 was spent on sending Redford and her executive assistant to South Africa for Nelson Mandela’s funeral, even though the federal government had reserved a seat for Redford on its plane. Redford said she needed her executive assistant with her, even though he was not invited on the federal government plane and Ottawa had taken care of logistics. Redford said she and her assistant needed to take a commercial flight home to be back in time for a cabinet swearing-in. Saher found that Redford could have flown home on the prime minister’s plane and still have made it back in time. Redford repaid the money for the trip.

The premier’s suite: Redford’s office was involved with plans to renovate the top floor of the Federal Building—offices owned by the province near the legislature. Saher found there was always a plan for a “premier’s den” and attached hosting area included in the renovation. In May 2012, however, the plans were changed to turn the hosting area into a premier’s suite, he said. The proposal called for “two rooms with sleeping and grooming quarters with clothes storage for an adult and one teenager.” About $173,000 was paid for design changes. The bedrooms were changed to meeting rooms in May after Redford resigned as premier.