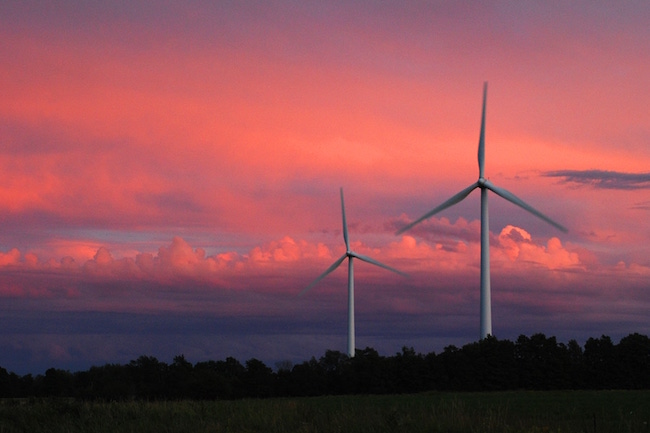 The province is aiming to procure about 700 megawatts of energy capacity. PHOTO: CanWEA

CALGARY—Indigenous leaders say they are eager to invest after Alberta unveiled a plan Feb. 5 that demands bidders in one of its next two rounds of renewable power project auctions include partnerships with those communities.

The province said it hopes to attract bids to build a total of 700 megawatts of renewable power capacity, enough to power 300,000 homes, with 300 MW reserved for proposals with Indigenous equity ownership and 400 MW without restriction.

Winners in both new rounds of bids will be judged on their power price bids, said Environment Minister Shannon Phillips.

She added the province hopes to duplicate the success of its first round, held last year, when three companies were chosen to spend about $1 billion to build four wind power projects capable of generating 600 MW of new generation, 50 per cent higher than target. They bid an average price of $37 per MW-hour, which the province touted as a record low price for renewable power in Canada.

The Kainai First Nation is planning a 200-MW wind project that’s “shovel-ready” to be built if selected, said Chief Roy Fox of the southern Alberta tribe also known as the Blood Tribe, speaking at the government’s news conference in Calgary.

“We want to proceed with the first phase, which is 100 megawatts, and we have everything in place,” said Fox, who also goes by the name Makiinima. “We have the expertise, we’ve built some capacity, we have the financing in place, we’re ready to go and it will be situated on our reserve lands.”

He said later the First Nation has an agreement to obtain funding from Indigena Capital, a Utah-based firm that finances Indigenous projects, but wouldn’t give a cost estimate for the project.

“We are good partners,” he said at the conference. “Just know, for us, success is well-being of our First Nations, of our people, and respect for the land that we all call home.”

Successful auction bidders will win a 20-year contract with the province that provides subsidies if power prices fall below the bid price, to be paid from Alberta’s carbon levy on heavy industrial emitters. If the price is higher, the companies are to pay the difference to the province.

The province wants to add up to 5,000 MW of renewable energy through private sector investment of about $10 billion by 2030.

“Climate change is indeed the greatest challenge humanity has ever faced. It is real,” Phillips said. “But it represents trillions in economic opportunity around the world. Albertans want to be part of those new jobs, those new businesses.”

Phillips said she expects wind power projects to be most successful at auction because they cost the least but she said the government is considering ways to encourage other options such as solar power in future auctions to improve reliability of the system.

Details of the upcoming auctions are to be worked out by the Alberta Electric System Operator over the next several months and a request for proposals is expected in the spring, with winning bids selected by year-end, said AESO chief operating officer Mike Law.

He said bidders in the 300-MW round will need at least 15 to 25 per cent Indigenous ownership to qualify.