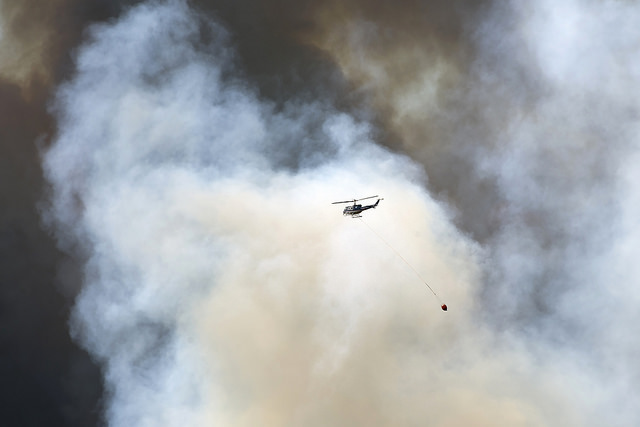 The wildfires in early May drove much of the oil and gas production in the Fort McMurray area offline temporarily. PHOTO: Chris Schwarz/Government of Alberta

CALGARY—Analysts predict oil prices driven higher by production stoppages during the Fort McMurray, Alta., wildfires in May will bolster the bottom lines of Canadian oil and gas companies as they report financial results starting this week.

Western Canada Select, the benchmark price for blended oilsands bitumen, rose by 58 per cent in the three months ended June 30 to an average of $42.52 per barrel from $26.93 in the first quarter of the year, said analyst Nick Lupick of AltaCorp Capital.

“Unfortunately, one of the contributing factors helping support Canadian crude prices in the quarter were the forest fires in Fort McMurray, which saw a total of 1.5 million barrels per day of bitumen and SCO (synthetic crude oil) production offline at its peak in mid-May,” he said on Tuesday.

He previously estimated that a total of about 28 million barrels worth $1.6 billion of oilsands production had been lost because of the fire.

Reporting season for major Canadian oil and gas producers starts Thursday with Encana, a company whose production was unaffected by the fire. A CIBC report estimates that Encana’s quarter-over-quarter cash flow—the difference between available cash at the start of the quarter versus the end—could rise 65 per cent due to the higher prices.

On Friday, Husky Energy is scheduled to report results that will reflect a decline in oilsands production at its Sunrise project in northern Alberta from 27,200 barrels per day in April to 4,300 bpd in May, according to statistics provided by analysts. The project was suspended for part of the month due to employee evacuations and pipeline shutdowns, although it sustained no physical damage.

Despite the lower production, Husky is expected to post a nine per cent increase in cash flow due to higher oil prices and better refinery profit margins, according to a report from RBC.

Gasoline shortages in early June caused by a mechanical outage at Suncor’s Edmonton refinery, combined with a maintenance shutdown at Imperial Oil’s nearby refinery, led to some service stations running out of fuel, driving up both prices at the pump and downstream profit margins for the refinery owners.

Suncor is expected to report July 27 and Imperial on July 29.

A recent report from CIBC analyst Arthur Grayfer based on internal industry statistics showed that output from thermal oilsands projects—those that use steam to produce bitumen from wells—fell to about 900,000 bpd in May from about 1.2 million bpd in April. The biggest drop was at Suncor’s Firebag project, which went from 201,000 bpd in April to about 30,000 bpd in May.

Similar statistics for oilsands mines are to be available next month, analysts said.