Has the federal government dropped the ball on Ring of Fire development?

Justin Trudeau has claimed the previous Tory government dragged its feet on building up the region, but does the claim pass muster? 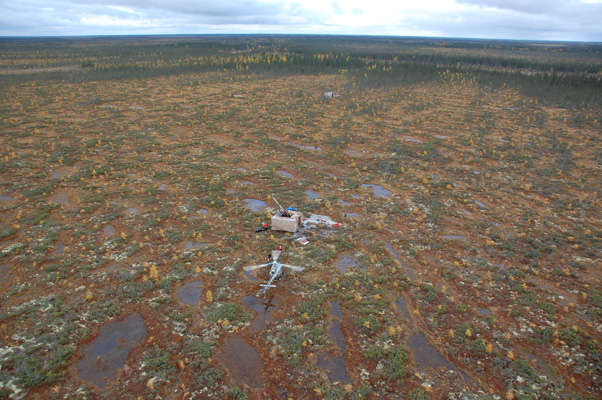 KWG Resources is one Ontario mining company working to develop the isolated region. A drill site on a chromite deposit in the James Bay drainage basin pictured. PHOTO: KWG Resources

OTTAWA—When a local reporter went digging for answers from Prime Minister Justin Trudeau about stalled development in the so-called Ring of Fire in northern Ontario, the prime minister went panning for political points.

“The Ring of Fire is a provincial initiative that the previous federal government was extremely detached from and uninterested in,” Trudeau said.

Far away from where he stood in Sudbury lies one of the world’s largest undeveloped deposits of chromite—a key ingredient in stainless steel—as well as deposits of nickel, copper and platinum. But development hasn’t budged in the last 10 years.

Trudeau pointed the finger at the previous Conservative government. The comments came after a cabinet retreat in Sudbury, one of the cities that could benefit from Ring of Fire development.

A nugget of truth, or political fool’s gold?

This statement gets a ranking of “some baloney” on The Canadian Press Baloney Meter—meaning it is partly accurate but important details are missing.

The previous government, it seems, wasn’t as involved as people in the region would have liked, but for key procedural, as opposed to political, reasons.

It is estimated that there could be between $31 billion and $54 billion worth of minerals in the area that shares a name with Johnny Cash’s hit 1963 single.

Federal spending in the area has been largely focused on skills development for local First Nations.

The previous Conservative government tasked Tony Clement in 2013 to co-ordinate federal efforts on the file that were—and remain—spread across multiple departments. (There remains a federal inter-departmental working group tapped with designing a co-ordinated approach to the Ring of Fire.)

The Ontario Liberals promised to spend $1 billion on infrastructure in the area, and asked for the same pledge from the federal Conservatives in 2014, only to be turned down. The money would help pay for a costly road to finally connect mining sites deep in the boreal forest to highways farther to the south.

Briefing material for Infrastructure Minister Amarjeet Sohi, obtained by The Canadian Press under the Access to Information Act, says the province has been told repeatedly that “transportation infrastructure for the Ring of Fire region should be supported by the private sector interests involved in the project.”

In March 2015, the federal government gave $393,814 to a road study, but that report has yet to be submitted to Infrastructure Canada. The CBC reported the study concluded that there needs to be more study. In the meantime, one of the mining companies in the region, KWG Resources Inc., announced this week it is partnering with a Chinese company to study the possibility of building railroad access to the Ring of Fire.

Mining is an area of provincial jurisdiction, leaving the federal government with little room to help on that front, said David Robinson, an associate professor of economics at Laurentian University in Sudbury, Ont. What the previous government could have done was help build relationships between companies and the First Nations in the region, but the Conservatives themselves had a “crummy” relationship with aboriginals, further constricting their capacity to help.

The previous federal government was not really involved in the region, said Chief Bruce Achneepineskum from Marten Falls First Nation, whose traditional lands include the Ring of Fire.

Achneepineskum said the province has not been overly helpful either, citing ongoing concerns from the band council that it doesn’t have enough funding to help it pay for things like business planning and company background checks required before signing agreements with mining companies.

Federal infrastructure money can’t flow to the region without a specific funding request from the provincial government, and so far the Ontario Liberals haven’t filed the necessary paperwork: Infrastructure Canada said it has yet to receive any applications for projects in the Ring of Fire, and the provincial auditor general criticized the Ontario Liberals for failing to apply for funding.

Laure Paquette, an associate professor in the department of political science at Lakehead University in Thunder Bay, Ont., said companies can’t push ahead with mining operations until they have a way to get their metals to market, and the federal and provincial governments have continually pointed the finger at each other over why no road has been built.

Complicating matters is the fact that there aren’t many votes to be had in the region for either government, with more seats—and infrastructure like highways to fund—around southern Ontario and the Greater Toronto Area, Paquette said.

The previous Conservative government didn’t do as much as people in the area would have liked, but did more than what Trudeau suggested, landing his statement firmly in the category of “some baloney”—the statement is partly accurate but important details are missing.

Will things change with the Liberals in power in Ottawa?

Trudeau said the federal Liberals “look forward to being positive partners on resource development” and “continue to look forward for opportunities to invest in the kinds of things that are going to bring jobs” to the region.

Robinson said the Liberals are stuck in the same situation as the Tories.

“The current government claims to be more activist. It still is in the situation where (mining) is a provincial jurisdiction and they’re talking about infrastructure projects, but they don’t actually have a plan as nearly as I can tell” for the area, Robinson said