Trump's shock win did not cause the broad market decline some expected, but it did spur some industries up sharply and others spiraling downward 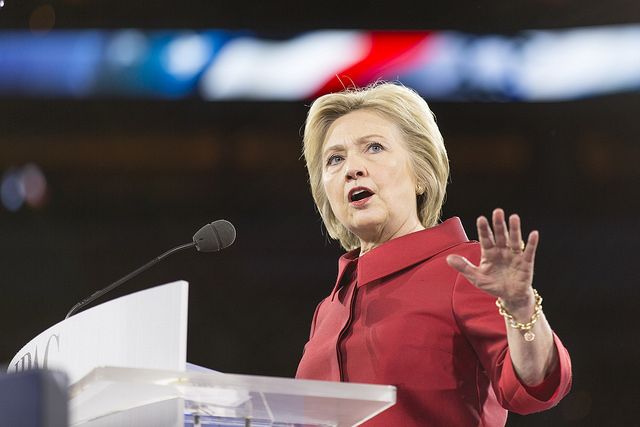 Hillary Clinton has been a vocal supporter of greater gun control, a factor investors expected would create a flurry of gun buying if she won the election. PHOTO: Lorie Shaull, via Flickr

WASHINGTON—Donald Trump’s upset victory over Hillary Clinton caught many investors off guard. While it didn’t cause a broad market decline as many had feared, it did send some stocks sharply higher and others sharply lower. Here’s how some industries shook out as investors try to anticipate how Trump’s talk on the campaign trail might translate into policies that affect U.S. companies. All share prices are as of market close Nov. 9.

Drugmakers. Pharmaceutical companies and pharmacy benefits managers rose sharply on the expectation that Trump and a Republican-controlled congress are less likely to crack down on rising drug prices. Pfizer jumped 7 per cent, Celgene rose 11 per cent and Express Scripts gained 7 per cent.

Defence contractors and infrastructure companies. Hopes that Trump will spend more on defence and follow through on campaign promises to boost spending on infrastructure benefited several companies. Raytheon jumped 8 per cent. So did Caterpillar, a heavy machinery maker.

Gun companies. With his endorsement from the National Rifle Association, Trump is seen as far less likely to push for stricter gun control measures than Clinton would have been. That means investors are no longer expecting a rush of gun sales due to nervous customers looking to stay ahead of government restrictions. Smith & Wesson dropped 15 per cent and Sturm, Ruger & Co. plunged 14 per cent.

Clean energy. Trump has advocated for lighter regulation of oil and coal companies, which could hamper demand for clean energy alternatives, such as solar and wind power. SunPower Corp. sank 14 per cent. A closer look at how the Canadian cleantech industry could feel the pressure of a Trump win.