The hub, proposed by the Greater Toronto Airports Authority, could drastically cut down on the one million car trips the area sees daily 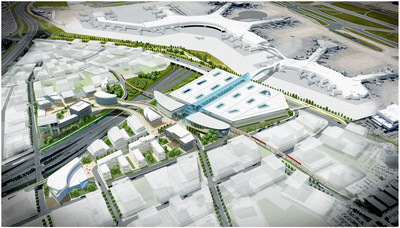 TORONTO—The Greater Toronto Airports Authority (GTAA) has announced plans to move forward with a regional transit centre to connect the Pearson Airport area to employment and residential areas throughout the Greater Toronto Area and Southern Ontario.

In addition to serving as a regional transportation centre, this hub will also house airport passenger processing and security screening.

The area around Pearson is the second largest employment zone in Canada after downtown Toronto, according to NEPTIS Research Foundation. More than 300,000 people work in the zone that includes parts of Brampton, Mississauga and Toronto.

NEPTIS found that the Pearson area generates more than 1 million car trips daily. Only 10 per cent of people take transit in the region currently.

“By the time New York and Chicago were the size that Toronto is today, they each had at least two major transportation hubs. Now is the time to ensure that better transit options are in place; otherwise we risk squandering the significant opportunities that are part and parcel of the exciting growth that the airport, the city and the region are experiencing,” said Howard Eng, GTAA president and CEO.

The centre will potentially connect a number of transit lines that are already in development or have been proposed by various levels of government, including: Eglinton Crosstown West LRT, Mississauga Bus Rapid Transit, Finch West LRT, Regional Express Rail on the Kitchener line, and the Province of Ontario’s High-Speed Rail concept.

The centre is proposed to be located across Airport Road from Terminals 1 and 3, with access from Highways 409 and 427 and from Airport Road.

This hub will be in the middle of a new mixed-use commercial area that will include office, retail, hotel and other commercial space. The plan for the area around the transit centre calls for improved sidewalks, landscaping and lighting.

The GTAA anticipates continued planning discussions throughout 2017, both for the centre, as well as for the individual transit lines that will connect to it.