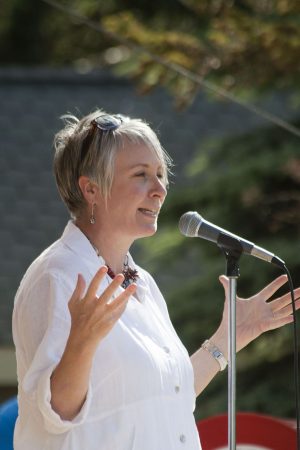 Labour Minister Patty Hajdu said the proposed proactive pay legislation is intended to close the gender wage gap and make sure everyone has a fair chance at success.

In 2017, Canadian women earned 88.5 cents for every dollar a man earned, as measured in hourly wages for full-time workers, according to government figures.

Under the proposed legislation, employers would need to examine their compensation practices and ensure women and men in workplaces that fall under federal jurisdiction receive equal pay for work of equal value.

It would apply to all federally regulated employers with 10 or more workers. That includes private-sector companies such as banks and railways, the federal public service, parliamentary workplaces, and the offices of the prime minister and other ministers.

But the government is allowing employers three years to establish pay-equity plans after the legislation comes into force. And it won’t come into force until a year after it passes and receives Royal Assent.

Hajdu said the federal government is proud to be the first in Canada to require proactive pay equity but it also wants to ensure “we don’t rush employers or employee groups” that will have to make it happen.

“We’re comfortable that allowing three years is a sufficient length of time,” she said, adding that it will give employers and workers the opportunity to co-operate.

Treasury Board President Scott Brison, who is in charge of the public service, said the legislation sets an example writ large for employers in Canada.

“We’ve made important progress to date, but it’s not enough. We need to do more,” said Brison.

Brison said the legislation will also repeal the Public Sector Equitable Compensation Act, introduced under the previous Conservative government, which would have subjected pay equity to collective bargaining.

Brison cautioned that the regulations that give the law teeth will take some time to write because the government has to consult with stakeholders and work with unions to develop an implementation plan.

The government announced it will also appoint a Pay Equity Commissioner who will work within the Canadian Human Rights Commission to enforce the new rules.