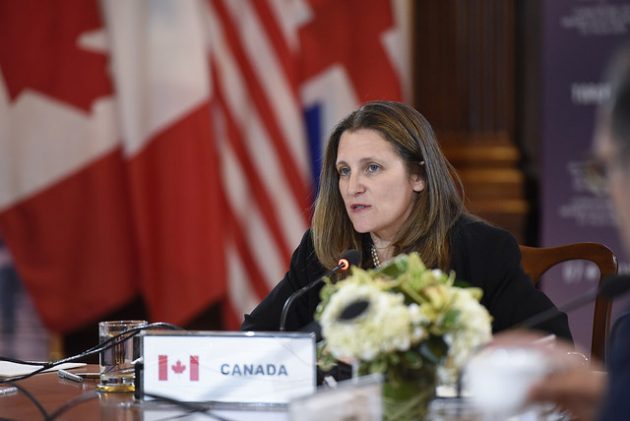 WASHINGTON – Chrystia Freeland and her U.S. trade counterpart are back at the NAFTA negotiating table today as time marches on towards a congressional deadline for a three-way deal before the end of the month.

But the foreign affairs minister insists she’s not watching the clock.

Rather, she says Canada’s negotiating team is focused on finding a compromise that meets the needs of all three countries as they work to modernize a trade agreement that governs $2-billion worth of trade every day.

It’s been 13 months since the effort began _ a time frame Freeland says is “absolutely normal,” given the complex and multifaceted nature of North American trade.

Not everyone agrees: senior Republicans on Capitol Hill have been agitating, pressing Canada to hurry up and make a deal already.

Among the evidence that the finish line isn’t far away: word from sources familiar with the negotiations that the U.S. backed off in recent weeks on its demands for lucrative procurement projects.

Freeland credits Mexico with making significant concessions in its deal with the U.S. on automobiles and for permitting large wage increases for Mexican auto workers _ something Canada and the U.S. both wanted to stop the growing flow of automobile production into Mexico because of its cheap labour.

Despite talk of animosity between the two U.S. neighbours, Mexico made “very deep, very difficult” concessions on auto rules that have helped push talks forward, she says.

Prime Minister Justin Trudeau says Canada is nonetheless standing firm on its own demands, which include preserving the independent dispute resolution mechanism known as Chapter 19 and protecting the country’s supply management system for dairy and poultry products.

“We’ve been very clear that we’re interested in what could be a good deal for Canada, but we’re going to need to see a certain amount of movement in order to get there,” Trudeau said Wednesday.

Pressure is mounting on the federal government to get a deal done. Texas Republican Kevin Brady, head of the influential House Ways and Means committee, says the two sides are “close enough” and Canada needs to “step it up” and get on board by joining the agreement in principle between Mexico and the U.S.

And House of Representatives majority whip Steve Scalise (R-La.) has warned of “growing frustration” on Capitol Hill with what he calls Canada’s “negotiating tactics.”

Trade observers say it’s likely that Canada intends to use every minute of time left on the clock before the Oct. 1 deadline, which is meant to give Congress time to quickly approve a deal before a new government with mixed feelings about the deal takes office in Mexico.

– With files from Mike Blanchfield in Ottawa