Balancing the budget is about creating new revenues without raising taxes, says Ford 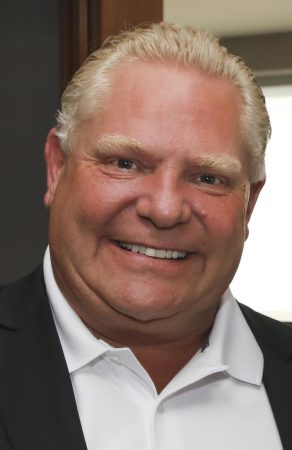 In a fireside chat in Kitchener, Ont., Ford was asked about his Progressive Conservative government’s upcoming March 25 budget.

While he wouldn’t give any specifics — except to say the provincial police delivered a copy of the document to his house this weekend — Ford said balancing the budget isn’t just about finding efficiencies, it’s about creating new revenues without raising taxes.

He said one example is that when he drives along the I-75 highway in the United States there are signs everywhere, but he sees very few along Highway 401 and other 400-series highways.

“That would create a couple hundred million more for the province that we could allocate to education and transportation,” Ford said. “It’s kind of a no-brainer. So we have to think like the private sector does.”

Ford’s office didn’t offer any further details or clarity on the idea when asked. Finance Minister Rod Phillips wouldn’t comment on specific initiatives, but said he does want to raise more money without raising taxes.

In its fall economic statement, the Progressive Conservative government said it was starting to look at “opportunities to maximize” government assets through non-tax revenue generation. Examples at the time were exploring naming rights at the provincial transit agency Metrolinx and the Metro Toronto Convention Centre, “with digital billboard opportunities.”

“As if the Premier hasn’t made enough gaffes with stickers and license plates, he’s now getting into the billboard business,” Schreiner said in a statement. “The premier should end the ‘Extreme Makeover: Ontario Edition’ and work on a real budget that addresses climate change, affordable housing and public health.”