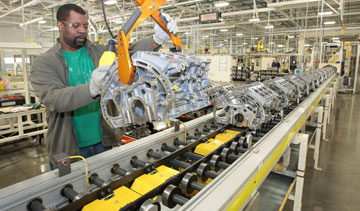 Auburn Hills, Mich.—Fiat Chrysler Automobiles has announced plans to invest US$74.7 million in its Engine Complex in Trenton, Mich.

With the plant poised to produce the automaker’s next-generation four-cylinder engine beginning in 2017, the investment will go toward retooling the facility’s north plant.

The new engine, which FCA says will offer better fuel economy and reduce CO2 emissions, will be built on Trenton’s flexible production line that was installed in 2012. The cleaner-burning engine will replace production of the 3.6-liter Pentastar V-6, which the facility currently manufactures.

The project will retain 245 jobs at the Michigan plant.