Tidal power is seen as a major opportunity in Atlantic Canada, though the technology has had some trouble finding its sea legs 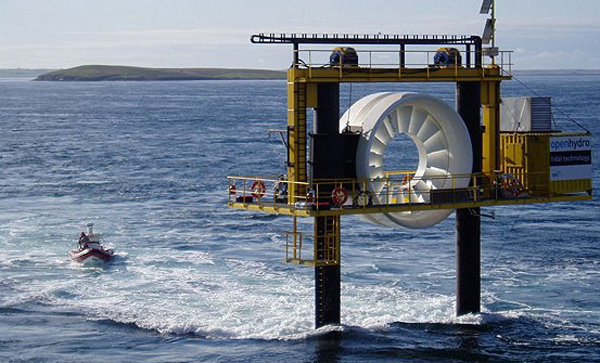 A test of OpenHydro’s turbine. An operating unit was tested in the Bay of Fundy in 2009, but the Bay’s famous tides proved too powerful. PHOTO: OpenHydro

HALIFAX—The federal government will bolster a project aimed at addressing challenges in harnessing the crushing tides of the Bay of Fundy and beyond to create renewable energy, Canada’s natural resources minister said June 22.

Jim Carr said the federal government will contribute $1 million to a project led by the Offshore Energy Research Association, which will look at current knowledge gaps in tidal power.

“Few countries in the world have the advantages we do when it comes to tidal power. Bordered by three oceans and with the longest coastline of any nation, Canada understands the potential of tides as a source of electricity,” Carr said during a news conference at the Bedford Institute of Oceanography in Halifax, N.S.

“Canada is a leader in tidal power technology, but for all of our expertise, there are still gaps in our knowledge _ still unanswered questions _ that we have to fill and to answer.”

Among the other areas that will be explored are how technology could reduce the costs associated with tidal power.

“We need specialized equipment and unique approaches to be able to safely and effectively resolve those challenges so that tidal energy is developed to its full potential,” said Dempsey.

The Nova Scotia government and the association are each contributing $125,000 to the project.

Last November, a turbine began producing electricity as part of a test project at the Fundy Ocean Research Centre near Parrsboro, N.S., on the Bay of Fundy—which has some the world’s highest tides.

The 1,000-tonne turbine was removed from the water earlier this month following an inspection and is now in Saint John, N.B.