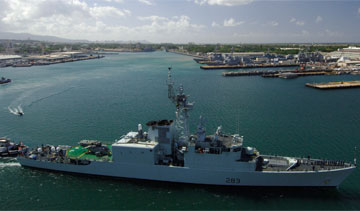 HMCS Algonquin was an Iroquois-class destroyer built at Davie Shipyards and decommissioned in 2015.

HALIFAX—Ottawa is going to buy an off-the-shelf design to replace some of the navy’s aging warship fleet as a way to save money and speed up the process.

The shipyard is one of two construction sites contracted in the government’s bid to build new warships.

She says the cost savings on using an existing design are yet to be determined.