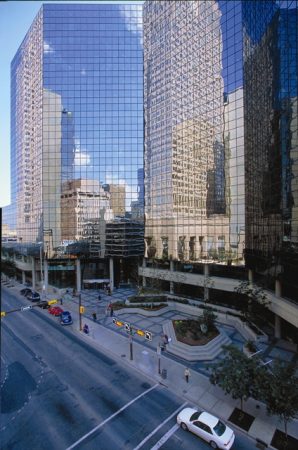 CALGARY—Spanish oil and gas giant Repsol SA is looking to sublet some of its downtown Calgary office space, adding to a market already swollen by energy industry cutbacks and layoffs.

Repsol’s Canadian branch has vacated eight of its 22 floors in the 52-floor Bankers Hall West over the past year and is now seeking tenants to take over its leases, said spokeswoman Berta Gomez in an email.

She said the space was originally leased by Calgary-based Talisman Energy, which was purchased by Madrid-based Repsol in May 2015 for about US$8.3 billion in cash plus debt of US$4.7 billion.

Talisman had leased extra space for growth that didn’t occur, Gomez said, adding that Repsol has fewer employees in the building now than when it bought Talisman because of relocations and staff cuts.

“We have arranged employees in a higher density manner in order to free up space for sublease and to promote teamwork,” she said in an email.

She wouldn’t say how many employees work in the building now. Repsol Canada said a year ago it would cut 10 to 15 per cent of its former Talisman staff without saying how many people that represented.

In a report Tuesday, Barclay Street Real Estate said that Calgary’s overall downtown office vacancy rate increased by 0.7 of a percentage point to 24.2 per cent in the first three months of the year.

It added that an additional half million square feet of new office space is expected to be added to the market over the summer and another one million will become available in seven to 18 months.

“This ‘shadow vacancy’ brings the vacancy rate in Calgary’s downtown to an estimated 26.6 per cent,” the report notes.

Some of the new space will be provided by Brookfield Place, whose 56-floor east tower, expected by owners to be the tallest building in Western Canada, is to be ready for occupancy late this year.

Cenovus spokesman Reg Curren said the company was expected to move staff there upon opening, but recently negotiated with the owner to delay the move until early 2019 because its need for office space has declined due to lower staffing levels.