Encana's top exec Doug Suttles said "geographic optionality" is an important advantage, adding that its Canadian operations are valuable because of the light petroleum liquids made from natural gas from its Montney and Duvernay wells 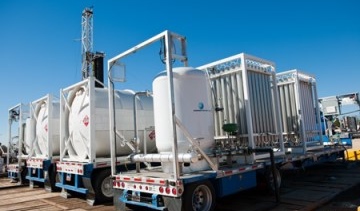 CALGARY—The head of Encana Corp. says the company will continue to invest in Canada and the U.S. even if President Donald Trump erects border taxes on Canadian energy exports.

The Calgary-based oil and gas firm has focused exploration and production activities on four formations over the past several years: the Permian and Eagle Ford in Texas and the Montney and Duvernay in B.C. and Alberta.

A border adjustment tax could make it more difficult for Canadian producers to compete in the U.S., Canada’s largest customer of oil and gas.

But Encana’s geographic “optionality” is an important advantage, CEO Doug Suttles said Tuesday, adding that its Canadian operations are valuable because of the light petroleum liquids such as condensate that are produced with natural gas from its Montney and Duvernay wells.

Condensate is used by oilsands producers in northern Alberta to dilute heavy bitumen to allow it to flow in a pipeline. It fetches prices that are typically close to benchmark U.S. crude prices.

Encana has targeted Montney liquids production—mostly condensate—to grow by five times to 70,000 barrels per day by 2019.

If a border tax causes higher oil prices in the U.S., Encana’s oil production south of the border would also stand to benefit from that, Suttles added.

Trump recently lumped energy in with other trade irritants such as softwood lumber and dairy in calling for “very big changes” to the North American Free Trade Agreement, although he has since backed away from his call to eliminate the trade deal.

Encana is budgeted to spend more than US$1 billion on its two core U.S. plays this year and about US$325 million on Montney and Duvernay, with contributions from joint venture partners taking total expenditures in Canada to about US$1 billion as well.

The results contrasted with deep losses in last year’s first quarter, when benchmark crude prices were at a 13-year low. Encana lost $379 million or 45 cents per share in the first quarter of 2016.

Encana reported first-quarter production of 317,900 barrels of oil equivalent per day, with 75 per cent from its four core areas.