Canadian oil and gas company says the deal will give it greater access to the U.S. Gulf Coast's significant refining capacity 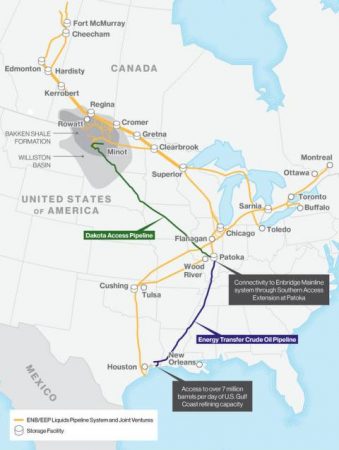 CALGARY—Enbridge Inc. and partner companies have struck a US$2-billion deal to buy about one-third ownership in a pipeline system that will carry crude oil from North Dakota to the U.S. Midwest and the U.S. Gulf Coast.

Calgary-based Enbridge will provide US$1.5 billion to its affiliate Enbridge Energy Partners, which will acquire a 27.6 per cent indirect interest in the Bakken pipeline system

Ohio-based Marathon Petroleum will pay a further US$500 million for a 9.2 per cent indirect stake in the system.

The Bakken system is expected to be deliver more than 470,000 barrels per day of crude. It will travel from the Bakken production areas in North Dakota to a point in Illinois southwest of Chicago and to Texas on the U.S. Gulf Coast.

The sellers are an affiliate of Energy Transfer Partners and Sunoco Logistics Partners LP.

Enbridge Inc.—which manages the EEP limited partnership—is expected to provide US$1.5 billion of financing for its affiliate’s purchase when the deal closes.

The president of Enbridge Energy Partners, Mark Maki, says the investment will provide with access to “the best markets for our customers” and the potential for expansion if demand warrants.

He says the pipeline projects are expected to come into service by the end of 2016 and immediately add to EEP’s distributable cash flow, which is used to calculate payments to its investors.

Related Stories
Work halted on pipeline Enbridge just spent US$1.5B to buy into
Enbridge announces further delays in Sandpiper pipeline
Enbridge looks to raise US$7B, but wont spend it all in one place
Enbridge to transfer $1.76B in pipeline assets to affiliate
Manufacturing In Focus