Though cagey about the measurements, builder of Burj Khalifa says new spire would be "a notch" taller than current record-holder 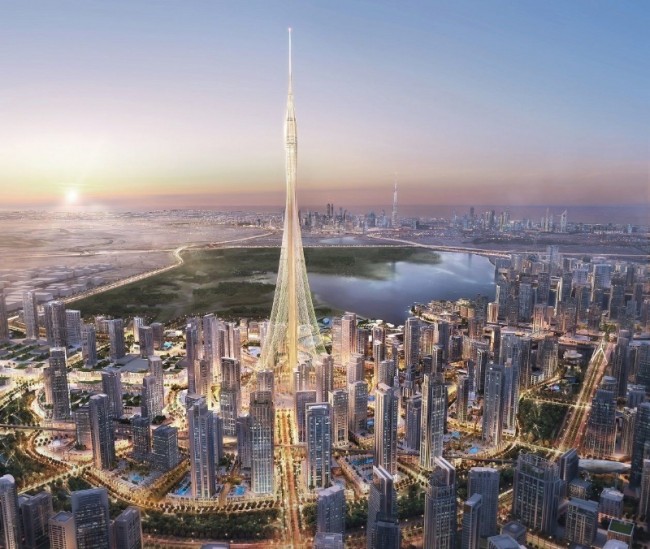 Artist conception of the Tower at Dubai Creek Harbour. Though the developer would not five precise details, it said the tower’s height would exceed the 2,717-foot (828-meter) Burj Khalifa. PHOTO: Emaar Properties

DUBAI, United Arab Emirates—Dubai is reaching for the sky once again, with the developer of the world’s tallest building vowing Sunday to build an even taller tower bedecked with rotating balconies and elevated landscaping inspired by the mythical hanging gardens of Babylon.

The government-backed company behind the project, Emaar Properties, hopes the new tower will entice a fresh wave of view-seeking homeowners even as it raises numerous other promised skyscrapers and repairs a prominent one gutted by fire on New Year’s Eve.

Company Chairman Mohamed Alabbar said the new observation tower would be “a notch” taller than the 2,717-foot (828-meter) Burj Khalifa. Just how much taller he wouldn’t say.

Unlike the Burj Khalifa, the new $1 billion tower will not be a traditional skyscraper but more of a cable-supported spire containing “garden” observation decks graced with trees and other greenery. Emaar says it will also contain a boutique hotel, restaurants and glass balconies that rotate outside the wall of the tower.

The structure’s design means it is unlikely to be widely recognized as a taller “building” than the Burj Khalifa even if it surpasses it in height.

The Chicago-based Council on Tall Buildings and Urban Habitat, for example, says at least 50 per cent of a structure’s height must contain usable floor area for it to be considered in its ranking of the world’s tallest buildings. That typically disqualifies telecommunications and observation towers that have only a small number of floors.

It and the Burj Khalifa could also be surpassed by a skyscraper being built in Jiddah, Saudi Arabia, that promises to rise more than 1 kilometre (3,281 feet) high.

The new Dubai tower will be the centerpiece of a new 6 square-kilometre (2.3 square-mile) development on the edge of the Dubai Creek, near a protected wildlife sanctuary that regularly attracts flamingoes and other water birds.

Alabbar likened the structure, designed by Spanish-Swiss architect Santiago Calatrava Valls, to a 21st-century Eiffel Tower that can act as a magnet not just for tourists but also for property buyers willing to pay a premium for nearby apartments with a view. It is due to open by the time Dubai hosts the World Expo in 2020.

Emaar followed a similar strategy when it raised the Burj Khalifa, which opened in 2010. The silvery skyscraper is flanked by fancy low and high-rise apartment complexes, some of which are still being built, as well as hotels, restaurants and one of the world’s biggest shopping malls.

The area is also home to The Address Downtown, a 63-story luxury hotel built by Emaar that went up in flames on New Year’s Eve.

Dubai police have blamed exposed wiring for sparking the blaze. Outside experts say the type of cladding used to sheath the building was likely a factor in fueling that fire and several others that have engulfed skyscrapers in the United Arab Emirates.

Emirati authorities have ordered a nationwide safety survey of existing buildings and promised to tighten regulations in the wake of the fire.

Asked about fire risks Sunday, Alabbar said it was important to learn from the accidents but suggested there are limits to how much builders can do.

“Safety rules are good, but can you really eliminate all risk? I don’t think human beings are able to eliminate all risk,” he told reporters. “Risks are there as long as we are progressing … These things do happen, and you have to go and fix them and make sure if they happen, they happen to a minimum.”