Addressing the Economic Club in Toronto, Premier Doug Ford reaffirmed his commitments to the taxpayer 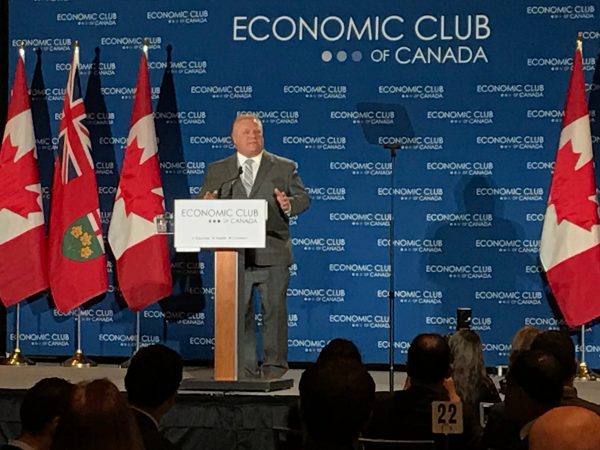 During the Ontario premier’s keynote address at the Economic Club of Canada in Toronto on Monday, he used his time to tout his government’s accomplishments and priorities for 2019, which includes job creation, balancing the budget responsibly and better healthcare.

Ford blamed the former Liberal government for inheriting a $15 billion deficit. He said that the 2019 budget will show a clear plan to “get back into the black.”

As a start, Ford said that in 2018, his government has saved $3.2 billion by finding efficiencies without compromising front-line services. The government has already reduced the deficit by $0.5 billion through reduced spending, Ford said.

Furthermore, Ontario doesn’t need a carbon tax to reduce greenhouse gas emissions, said Ford. Rather, the carbon tax will drive up gas and food prices, the cost of heating and will hurt Ontario’s economy and its manufacturers, he added.

Instead, the Ontario government is working on an alternative climate change plan, Preserving and Protecting our Environment for Future Generations: A Made-in-Ontario Environment Plan, which was introduced last year by Environment Minister Rod Phillips.

Ford warned against the risk of a Carbon Tax Recession. His speech did not provide details to back up his claim.