The PCs said previously the freeze will not apply to essential frontline staff such as police, corrections officers and fire services. Ford's government has received sharp criticism from the NDPs for the move 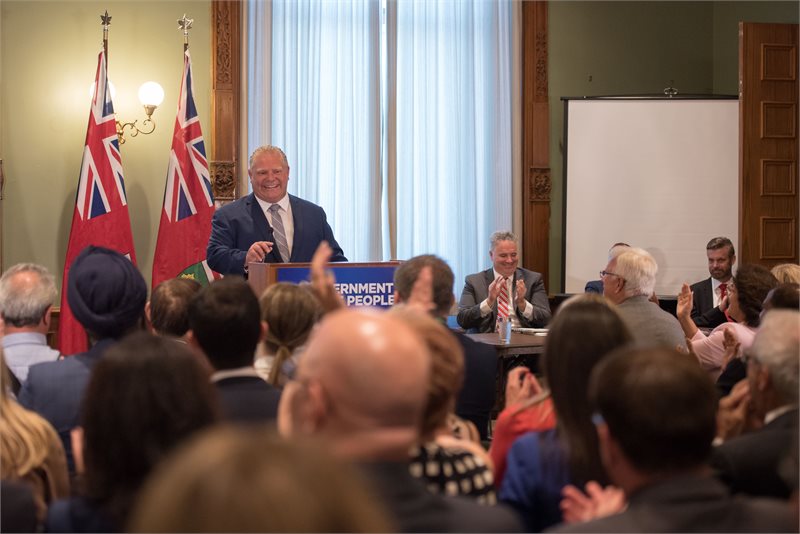 “We’re going to make sure we watch every single penny of the taxpayers’ dollars,” said Ford. PHOTO: Doug Ford/Twitter

TORONTO—Ontario’s incoming premier said Tuesday that teachers and nurses are exempt from the public service hiring freeze he has ordered as part of his efforts to curb government spending.

The Progressive Conservatives had said the freeze did not apply to essential frontline staff such as police, corrections officers and fire services, as well as lateral moves within the public service, but some observers had raised concerns about how the move could impact services like health care and education.

When asked if his hiring freeze would apply to nurses, Ford said “absolutely not.”

“There’s not on the teachers either,” he said. “But again, we’re going to make sure we watch every single penny of the taxpayers’ dollars.”

Ford was also asked when he would recall the Ontario legislature and launch a government-wide audit he promised during the campaign, but would only say that details of both plans would be announced in the coming days.

NDP Leader Andrea Horwath, whose party will form the official Opposition, said it’s concerning that Ford’s “big first move” is to cut back public services, which she said is what happens under a hiring freeze.

Horwath said it’s hard to gauge the full impact of Ford’s announcement because he hasn’t laid out the details or discussed the issue with stakeholders such as labour groups.

“This seems to be his M.O.,” she said. “He simply shoots his edicts out there and expects that that’s going to solve problems.”

Vicki McKenna, president of the Ontario Nurses’ Association, said excluding nurses from the hiring freeze was “the right thing to do,” adding that hospitals are already dealing with thousands of vacancies among nursing staff.

Ford’s comments came as his Progressive Conservative caucus met for the first time since winning a majority this month.

Asked about what message he was bringing to his team of legislators, Ford said he stressed the need to help Ontario residents and be prudent with public funds.

“Never forget who put us here—the people,” he said. “And make sure that we watch every single penny moving forward. No more lunches, no more free lunches.”

In a short speech to an enthusiastic Tory crowd earlier in the day, Ford recapped some of steps taken by his transition team, including last week’s announcement that he would scrap Ontario’s cap-and-trade system.

“Throughout this election campaign, I told the people of Ontario that help is on its way. By looking around this room I can finally with confidence tell the people help is here,” he said to a burst of applause.

He did not, however, mention the hiring freeze in his speech, or the limits on discretionary spending ordered at the same time. Those include restrictions on out-of-province travel and a ban on providing food and drink for staff meetings.

A spokeswoman for Ford said he had bought pizza for the caucus Tuesday out of his own pocket.