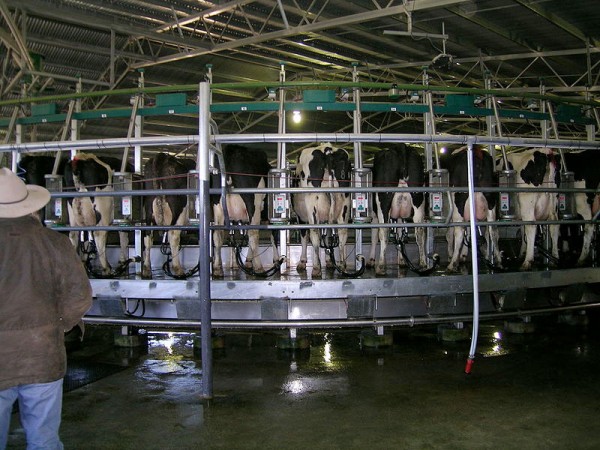 The the Canadian Dairy Commission says the increase will alleviate producers’ financial stress and ensure the fall’s high demand for dairy products is met.

TORONTO—Restaurateurs are crying foul over a second industrial milk price increase this year, set to take effect Thursday, which they say will likely lead to higher food prices for Canadians.

In July, the Canadian Dairy Commission decided to boost the price of industrial milk—which is processed into yogurt, ice cream, cheese and butter—by 2.76 per cent. That’s on top of a 2.2 per cent hike that occurred in February.

The dual increase, the first in a single year since 2008, was introduced because of a “very unique and unexpected situation,” said Benoit Basillais, CDC’s chief of policy and economics, in an email.

Basillais said the hikes came because producer revenues “decreased rapidly” last fall, in part due to a decrease in global demand from importing countries and changing consumer preferences _ and did not stabilize by early spring as anticipated.

The increase will alleviate producers’ financial stress and ensure the fall’s high demand for dairy products is met, he noted.

Basillais added the move was intended to be an advance of the CDC’s December price decision for 2017, though he said it’s “premature” to say there will be no increase next year.

While the dual price hike may provide a reprieve for producers, it’s likely to put the burden on restaurateurs, who must decide whether their clients can stomach higher prices for dining out.

“We’re a heavy cheese user,” Pratt said, adding the price increase is “very difficult for us.”

Pratt’s already increased prices once this year and doesn’t think his customers will take kindly to another one so soon.

He said he’ll likely have to absorb the cost increase, which could be difficult considering restaurant profit margins are low in Canada. In 2012, the operating profit margin for food services and drinking places was 4.2 per cent, according to Statistics Canada.

“I’m the guy down here that’s kind of struggling to make a buck in a very tough market,” Pratt said.

It seems likely diners will end up paying more, according to Pierre Cadieux, vice-president of federal and Quebec government relations for Restaurants Canada, a not-for-profit association representing 30,000 businesses in the restaurant and food-service industry.

“That (price hike) has to be passed on to the consumer somehow,” he said.

The cost of items using these ingredients at restaurants may increase, Cadieux suggested, or restaurateurs may instead remove some menu items that require a lot of the higher-cost ingredients.

Milkshakes, he said, are the perfect example of an item disappearing from Canadian food outlets as few consumers are willing to pay the price shops must charge for the diner staple.

Basillais noted the difference consumers will see in prices for goods using industrial milk is difficult to anticipate because it depends on how much of the final good is made up of the dairy component. Other factors, like transportation, packaging and processing costs, also need to be accounted for, he said.

But, he added, price hikes experienced by consumers won’t be more than 2.76 per cent.

The CDC is part of Canada’s supply management system for the dairy industry, which is meant to ensure supply meets demand and to reduce price volatility, said Basillais.

“We have to reinvent that part of our agricultural system,” said Cadieux. Though, he added, it’s not on anybody’s political agenda at the moment.

The poorest 20 per cent of Canadian households pay an extra $339 annually for dairy and poultry due to supply management, a report from the Montreal Economic Institute released Wednesday.

That premium pushes more than 100,000 Canadians below the poverty line, according to the study.

“A reform plan that would phase out production quotas and import duties would benefit all Canadian consumers,” the authors write, “but it would especially benefit poorer individuals, raising their living standards and effectively lifting many of them out of poverty.”

This management system does mean consumers pay higher prices, said Jim Fisher, a professor at the University of Toronto’s Rotman School of Management.

But, he added, it also helps protect Canadians from an insufficient supply of products, even if they pay a touch more for them.