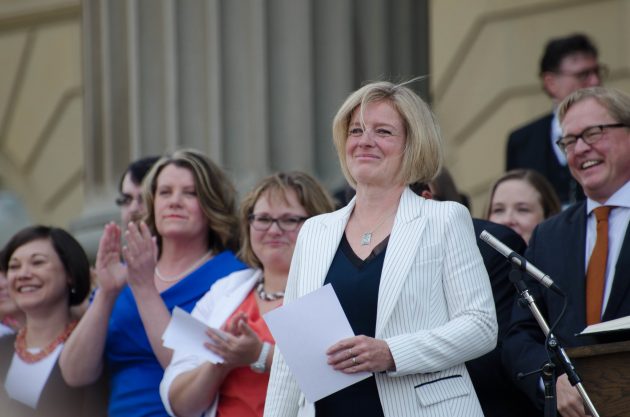 EDMONTON – Voters are heading to the polls in the Alberta election today and advance turnouts suggest it could be busy at the ballot boxes.

Almost 700,000 people voted early in malls, airports, recreation centres, public buildings and even an Ikea store. That was well ahead of the 235,000 who came out early in the 2015 election that saw Rachel Notley’s NDP deliver a surprise knockout blow to the 44-year run of the Progressive Conservatives.

This time around, the Progressive Conservatives are no more.

The PCs merged with another right-centre party, the Wildrose, to create the new United Conservatives under former federal cabinet minister Jason Kenney.

The four-week campaign focused on personal attacks and on Alberta’s fragile economy, which has been struggling for several years with sluggish oil prices and unemployment levels above seven per cent in Calgary and Edmonton.

Kenney has argued that Notley’s government has made a bad situation worse with higher taxes, more regulations and increases in minimum wage.

Notley, in turn, has said Kenney’s plan to freeze spending and pursue more private-care options in health care will have a profound impact on students in the classroom and on patients waiting for care.

Notley said her success working with Trudeau – or picking her fights with him as necessary – is what led to progress on the Trans Mountain pipeline expansion to the B.C. coast. She expects construction to begin this year.

She said Kenney’s promise to challenge Trudeau in court on everything from the federal carbon tax to proposed energy industry rule changes is cynical, self-defeating shadow-boxing given the collaborative realities of political decision-making.

Kenney has campaigned on the “Trudeau-Notley alliance” that he says has turned Alberta into a doormat for Trudeau and other oil industry foes with no more than a faint and as yet unrealized promise of one pipeline expansion to the coast.

Notley has also tried to make Kenney’s character an issue. A number of his candidates have either quit or apologized for past comments that were anti-LGBTQ, anti-Islamic or sympathetic to white nationalism.

Kenney has called the attacks a “fear-and-smear” red herring to distract from the NDP’s economic track record of multibillion-dollar budget deficits and soaring debt.

On the political fringes are the Alberta Party and the Liberals, each of which elected one candidate to the legislature in 2015.

The Alberta Party, led by former Edmonton mayor Stephen Mandel, is running a full slate of candidates. It’s promising to be the safe centrist middle ground by combining the economic conservatism of the UCP with the social progressivism of the NDP.

The Liberals, led by lawyer David Khan, are running on a similar platform with one significant exception _ a provincial sales tax.

History will be made no matter what.

Notley will either be the first Alberta NDP premier to win re-election or the first leader in the province to fail to win a renewed mandate on the first try.