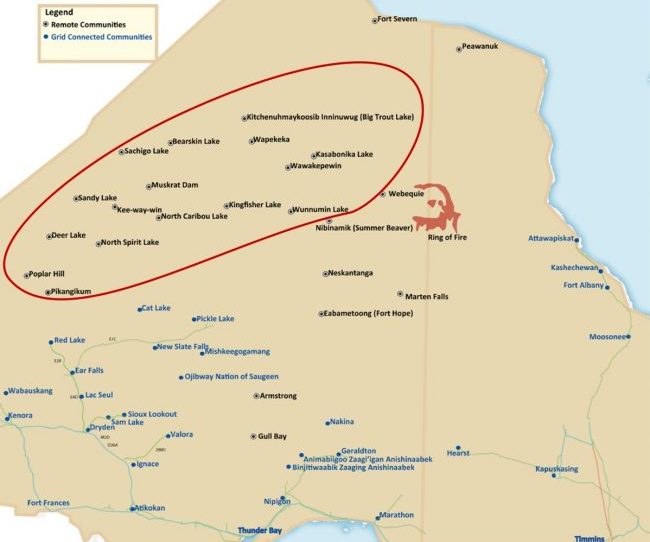 A map of the remote First Nations communities. PHOTO: Government of Ontario

TORONTO—A new agreement between Ontario First Nations, the federal government and the province will see 16 northern communities connected to the power grid in a $1.6-billion project that will end their dependence on diesel fuel for power.

The work, to be done in phases, is expected to completed by 2023 and will shift the communities to the provincial electricity grid.

Premier Kathleen Wynne said the Wataynikaneyap Power Grid Connection Project will be the largest Indigenous-led and Indigenous-owned infrastructure project in the province’s history.

“(The project) will mean thousands of people will no longer have to rely on dirty diesel fuel to meet their energy needs,” Wynne said in a statement. “Access to clean, reliable and affordable electricity will open up new economic opportunities. It will lower the cost of housing and help ensure a clean supply of drinking water. It will mean cleaner air and a healthier place to live right now—and in the future.”

Wataynikaneyap Power—a majority-owned company by 22 northern First Nations—was founded in 2015 and will build the connection to the grid along with Newfoundland-based utility Fortis Inc., which will hold a 49 per cent stake in the project.

“Wataynikaneyap has made tremendous progress connecting 16 remote First Nations to the provincial electricity grid in the first phase of this project, and we are pleased that Ontario has funded the expansion of this vital infrastructure to more remote communities,” Fiddler said. “Connecting our remote First Nations to the provincial energy grid will finally end their reliance on costly and dirty diesel generation and help bring health and economic benefits to our communities.”

In 2014, a study by Ontario’s Independent Electricity System Operator determined that there was a positive business case to extend the provincial electricity grid to 21 of the 25 First Nations that depend on diesel.

The federal government will cover the cost of the project.

Kenora MP Bob Nault said the groundwork for this announcement was laid in August 2017 with $60 million to build a 117-kilometre grid line from Red Lake, Ont., to Pikangikum First Nation. That work is scheduled for completion in late 2018.

“This historic investment will bring with it new economic development opportunities, better access to services and create safer and healthier communities,” Nault said in a statement.