RCMP in Caraquet, N.B. say video surveillance from a factory in Grand Anse shows a transport truck taking off with a 16-foot-long trailer filled with lobsters 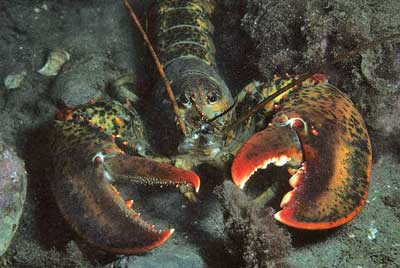 An American Lobster, common across the Atlantic coast of the U.S. and Canada. PHOTO: Derek Keats, via Wikimedia Commons

CARAQUET, N.B.—Police in New Brunswick are asking the public to be on the lookout for a stolen trailer loaded with frozen lobster.

“I don’t know if they thought they were going to have a big barbecue for Canada Day weekend,” Cpl. Jayson Hansen said in an interview. “There had to be some degree of planning, but it’s hard to know how much.”

Hansen is warning seafood lovers to steer clear of deals that seem too good to be true, saying possession of any stolen good is a crime.

“If someone is selling lobster out of a truck at low market value, it should be a hint that they should be suspicious,” he said.

He says police are not disclosing the value of the pilfered lobsters because it might encourage illegal sales, but that the amount is more than $5,000.

The incident is the latest in a series of crustacean capers in the Maritimes.

According to police in Newfoundland and Labrador, nearly 50 kilograms of lobster were taken from a fishery in Lourdes in May.

In Nova Scotia, RCMP say 48 crates of live lobster, more than 2,100 kilograms, were stolen from an outdoor pound at a business on Cape Sable Island in January.

The theft followed a similar incident late last year, when 14 crates of lobster were stolen from a secure compound on Morris Island near Yarmouth.

“Any valuable commodity is a target for thieves, whether it’s beer, garden implements or something else,” Hansen said. “Lobster is a high value item and it’s conveniently packed in boxes.”

Hansen says police are intent on catching the lobster-nappers, but he can’t speak to how well the trailer’s contents will be preserved.

“It’s probably not something that’s going to be returned to the market,” he said. “It’s not going to sit in an evidence locker.”