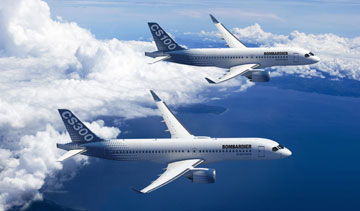 Philippe Couillard says the province’s first payment to the company will be made when issues including liquidity are dealt with.

The first of two installments to Bombardier was originally due April 1 and Bombardier says it is aiming to have the overall deal completed by the end of June.

Bombardier has a lot riding on the success of the CSeries aircraft, which is two years behind schedule and has incurred about US$2 billion in cost overruns.

The Montreal-based firm has also sought US$1 billion from the federal government, assistance that Couillard said would give “an extra layer of certainty” to the CSeries program.

After speaking at an aerospace conference, Couillard said he is confident the federal government will join its efforts to support the project.

“Frankly, it would be very surprising to see the federal government not to be present at the most important innovation program in Canada right now,” he said Monday.

“I have full confidence that Mr. Trudeau and his government understand that the aeronautical sector is as important to Quebec as the auto sector is for Ontario.”

The federal government has said it has been studying the funding request since it was made in December.

Earlier at the conference, Bombardier CEO Alain Bellemare said Quebec’s support has bolstered confidence among airlines looking to buy new planes. He said the province’s partnership with Bombardier has helped it shore up its cash position, allowing it to get a better reception when meeting customers.

“The investment needed to develop new technologies today in our industry are very large, very complex and therefore public-private partnerships are essential for Canada to remain a global leader in aerospace,” he said.

The CSeries plane is expected to enter commercial service in July by Swiss Airlines. Bombardier is set to announce its first quarter results on Friday.