CN is stressing "an offensive play, mergers and acquisitions," after years of focusing on organic growth, says CEO 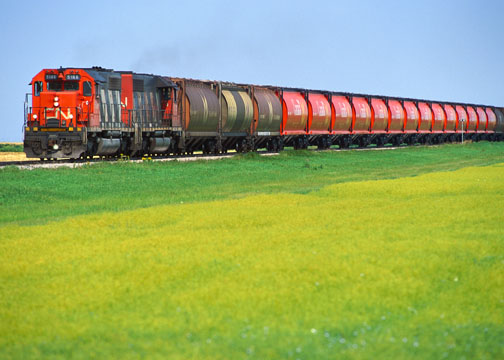 At Tuesday’s investor day in Toronto, Jean-Jacques Ruest stressed “an offensive play, mergers and acquisitions,” after years of focusing on organic growth.

“We want to re-enter that…we want some sort of inorganic growth,” the CEO of 11 months told shareholders.

In March, CN Rail closed its purchase of the Winnipeg-based TransX trucking and transport company.

In May, the company’s joint bid for the largest container terminal in Eastern Canada hit a snag after Singapore-based port operator PSA International Pte Ltd. snapped up the Halterm terminal at the Port of Halifax, rattling Ruest’s plans to create “a Prince Rupert of the east” and pick up more non-rail assets.

Last month, however, the Quebec Port Authority announced it had inked a deal with Hong Kong port giant Hutchison Ports and CN Rail to build and run the new container terminal at Quebec City.

He noted CN’s “underutilized network” between Toronto and Halifax, which has seen much slower growth in revenue ton miles (RTM), a key industry metric.

“Manufacturing in the east is not growing anymore. What’s growing is people. People consume…and that’s intermodal,” he said, referring to container traffic.

Ruest also stressed technology, such as an “automated inspection portal,” as a path to efficiency. The machine, which melds high-resolution imaging with artificial intelligence, can assess 120 cars for defects in the amount of time it takes a mechanic to evaluate one, the company said.

The Montreal-based railway’s bumped-up profit forecast for 2020 to 2022 exceeds its prior target of 10-per-cent annual growth, while it reiterated its 2019 goal of low double-digit growth.

A trade dispute with China over canola, fewer frac sand carloads due to wet weather and traffic diversions owing to the threat of a strike at the Port of Vancouver all hurt volumes, Spracklin said.

He said the forecast, made amidst CN’s investor gathering this week, looked three years down the line rather than five years, suggesting the targets are a continuation of those rolled out at the company’s last investor day in 2017.