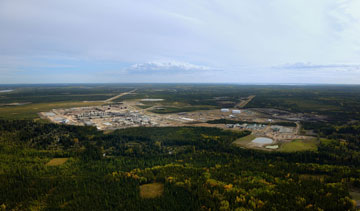 CALGARY—Cenovus Energy says it is planning to boost its 2017 capital spending by 24 per cent and resume work on the expansion of its Christina Lake oilsands project in northeast Alberta.

The oil producer says it is planning to invest between $1.2 billion and $1.4 billion next year.

About 70 per cent of the company’s 2017 budget will go towards sustaining its oilsands production as well as base production at its other operations.

The other 30 per cent is allotted for growth projects at its existing and emerging oilsands assets, among other things.

The company says it will also increase its total oil production in 2017 by 14 per cent, compared to its forecast average production for 2016.

Cenovus plans to resume work on the Christina Lake expansion, which was paused in late 2014 due to slumping oil prices, in the first half of 2017.

“With the tremendous progress we’ve made over the last two years in reducing operating costs and sustaining capital, we’re confident we can move forward with projects that have strong potential to drive shareholder value,” Brian Ferguson, Cenovus president and CEO, said in a statement.

“As we resume investing in growth projects in the year ahead, Cenovus will continue to focus on maximizing cost efficiencies and maintaining financial resilience while delivering safe and reliable operations.”