Continuing to govern from the Twitter pulpit, Donald Trump blasted high cost of modifying jets; President-Elect currently uses a white leather and gold-outfitted Boeing 757, but is expected to adopt Air Force One in January 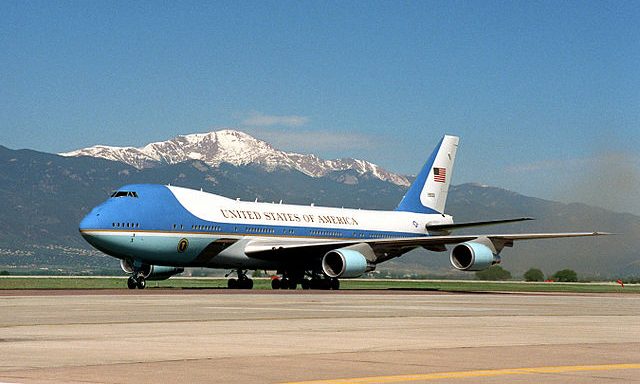 The Boeing VC-25, which is a modified version of the 747, has ferried U.S. presidents around the world since the late 1980s. U.S. Air Force is currently looking for a replacement

Costs for the two Boeing 747s are “totally out of control,” Trump told reporters in the lobby of his New York skyscraper.

The government has contracted with Boeing to build the planes, which would go into service around 2024. That means Trump wouldn’t fly on the aircraft, which carry U.S. presidents around the globe, unless he pursued and won a second term. But the Air Force has pressed for a faster schedule, saying the aging current Boeing 747s are becoming too expensive to repair and keep in good flying shape.

The contract for the planes was to be about $3 billion, but costs have been reported to be rising.

The General Accountability Office estimated in March that about $2 billion of the total—for work between 2010 and 2020—was for research and development on complex systems, not for building the actual aircraft. The inflated $4 billion figure Trump cited appears to include operation and maintenance as well.

Trump tweeted early Tuesday, “Boeing is building a brand new 747 Air Force One for future presidents, but costs are out of control, more than $4 billion. Cancel order!”

Later, he said the costs are ridiculous: “I think Boeing is doing a little bit of a number. We want Boeing to make a lot of money, but not that much money.”

The price of Boeing stock dipped after his comments but not drastically. Trump had tweeted in 2013 that he owned Boeing stock, but a spokesman said Tuesday he sold all of his stocks in June.

Boeing responded to Trump Tuesday in a statement: “We are currently under contract for $170 million to help determine the capabilities of these complex military aircraft that serve the unique requirements of the president of the United States. We look forward to working with the U.S. Air Force on subsequent phases of the program allowing us to deliver the best planes for the president at the best value for the American taxpayer.”

The $170 million figure is just for a portion of the research and development efforts.

Trump now uses his own plane, a Boeing 757, which he has outfitted with white leather and gold, a large flat-screen television and a bedroom. But as president it is expected that he would travel aboard the Air Force jet, which is equipped with special safety, defensive and communications equipment. Air Force One also has seating for reporters; Trump generally does not allow the press on his own plane.

—The Associated Press writer Joseph Pisani contributed to this report