Project to replace the aging Saddledome could cost as much as $1.8 billion, according to a new city report 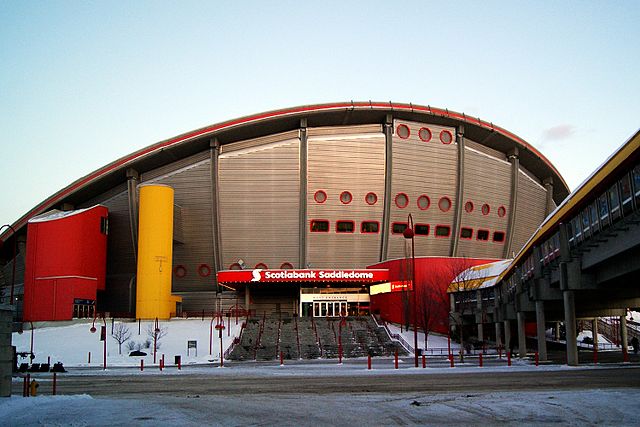 CALGARY—The City of Calgary has batted the ball back to the Calgary Flames in asking the NHL team to consider other locations and options for a new arena and football stadium.

Council has invited Calgary Flames Sports and Entertainment, who also own the CFL’s Stampeders, to respond to a city manager’s report stating the proposed location on the west side of downtown was too much money.

Without completely slamming the door shut on constructing a 20,000-seat arena, a 30,000-seat football stadium and fieldhouse all in the yet-to-be-developed West Village, the Flames were asked to work with the city and Calgary Stampede in investigating an arena build at the Stampede Park, as well as a renovation of McMahon Stadium.

“It really is not just punting the ball further down the field, but really trying to keep options open to see if there’s anything possible there if the CalgaryNext proposal in the West Village proves completely unfeasible,” Mayor Naheed Nenshi said.

“The report did say it was not feasible in its current forms. The question is do you make it feasible or do you have to think of something else?”

An alternative location for the multi-purpose fieldhouse was also debated.

The initial estimate of the proposed CalgaryNext project was $890 million when announced last August.

But a city report released late week pegged the bill at $1.8 billion—with taxpayers bearing as much as $1.3 billion—when costs of land, municipal infrastructure, environmental remediation and financing are incorporated.

The Flames have offered $200 million of their money for the project and proposed a $250-million loan be repaid through a ticket surcharge.

Calgary Flames president and chief executive officer Ken King felt encouraged after council’s debate Monday because the West Village option wasn’t off the table. The door was still open to address council’s concerns with it, he said.

“I’m thrilled, frankly,” King said. “We now know specifically and precisely some of the issues they’re concerned about so we can hone in on those and deal with them on a direct basis.

“We’ve always known the contentious issues, but I think this was a level of clarity that came out of this report, which is something to focus on.”

While the West Village was clearly still the Flames’ preferred option, King said they were open to exploring a Plan B of the arena at Stampede Park and a McMahon reno.

“We will see how palatable that is,” King said. “We were asked to contemplate that when we were briefed on this report. We would be somewhat hypocritical not to keep an open mind about that.”

The Flames will be invited to a city strategic planning meeting in June to give their response.

The Scotiabank Saddledome, built on the Stampede grounds in 1983, will be the oldest NHL arena next season. McMahon Stadium, where the Stampeders play, was built in 1960.

One of the major costs of the CalgaryNext project is decontaminating the proposed site south of the Bow River, which was once a creosote wood-treatment plant.

The report said a quick remediation of three years would cost $140 million, while a slower pace of five years dropped the cost considerably to $85 million. But add construction to the latter option and it could take up to a decade to complete the project.

“Yes it’s cheaper than we thought to do the cleanup, but it’s going to take a lot of years, on the outside even 10 years,” Nenshi said. “You can’t start building anything subsurface until that’s done.

“I think what council said today is to look around Stampede Park and see if there’s anything there and I think that’s something well-worth doing.”

NHL commissioner Gary Bettman urged the city to get moving on a new arena during a stop in Calgary in January, saying the city could fall out of consideration for hosting major hockey events like the draft and the all-star game.

“The longer it takes, the harder the task becomes,” Bettman said. “CalgaryNext needs to happen and as part of the broader project, the Flames need a new arena.”