U.K. votes for Brexit, global markets freak out as everyone wonders what’s next

by Danica Kirka And Jill Lawless, The Associated Press, with files from The Canadian Press  June 24, 2016

"Major economic and political uncertainty will be a fact of life," according to Howard Archer, an economist for IHS Global Insight, which was just one of many firms to cut growth forecasts after the U.K voted for Brexit 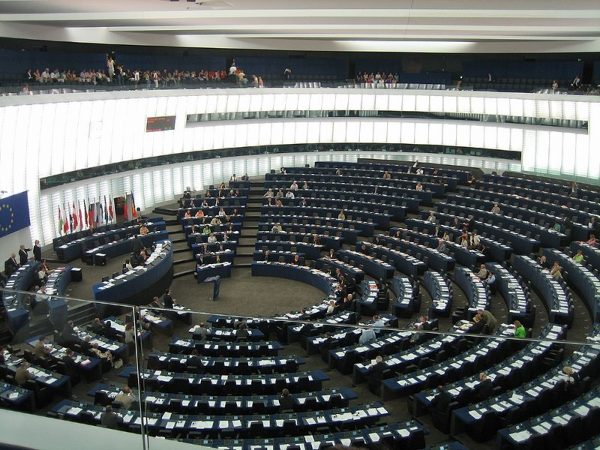 After the Brexit vote, things are about to get very busy inside the European Parliament, pictured here. PHOTO: JLogan

Trudeau said Canada shares deep historical ties and common values with the U.K. and the EU and will continue to build relationships with both as they forge a new relationship of their own.

“Canada has tremendous economic fundamentals that we are strengthening with key investments in infrastructure and measures to grow our middle class. We are well positioned to weather global market uncertainty as we have done in the past.”

Britain voted to leave the European Union after a bitterly divisive referendum campaign, toppling the prime minister, sending global markets plunging and shattering the stability of a project in continental unity designed half a century ago to prevent World War III.

The decision launches a years-long process to renegotiate trade, business and political links between the United Kingdom and what would become a 27-nation bloc, an unprecedented divorce that could take decades to complete.

North American stock markets tumbled as the trading day began, with the S&P/TSX composite index down 227.03 points at 13,904.35 in early trading.

Estimated impact
The Conference Board of Canada expects some negative impacts on Britain’s economy in the short term, such as a deterioration of the pound, inflation and loss of investor confidence. In Canada, the economic impact should be relatively minimal and will have more to do with uncertainty and loss of confidence.

Indeed, the Canadian dollar is down more than a cent and half against against the U.S. greenback as markets around the world come to terms with the Brexit vote, which puts Britain on a path towards exiting the European Union.

Meanwhile, the British pound plunged sharply against other currencies this morning, including the Canadian dollar, bringing it to lows that it hasn’t seen since the mid-1980s.

The pound was down more than eight per cent compared with the U.S. dollar and about 6.5 per cent against the Canadian dollar.

The result shocked investors, and stock markets plummeted around the world, with key indexes dropping 10 per cent in Germany and about 8 per cent in Japan and Britain.

There are concerns that severing ties with the single market will hurt the U.K. economy and undermine London’s position as a global financial centre. Bank of England Gov. Mark Carney sought to reassure the markets.

“We are well prepared for this,” Carney said. “The Treasury and the Bank of England have engaged in extensive contingency planning. … We have taken all the necessary steps to prepare for today’s events.”

A CIBC commentary says the Bank of England could cut its key interest rate as early as June 26 and “we might also see co-ordinated actions with other central banks to smooth currency movement.”

A Scotiabank foreign-exchange note said there had been reports that central banks in Switzerland and Denmark had directly intervened to dampen currency fluctuations.

Howard Archer, global economist for IHS Global Insight, said “Major economic and political uncertainty will be a fact of life for some considerable time, likely weighing down markedly on business and household confidence and behaviour, so dampening corporate investment, employment and consumer spending.” IHS cut its estimates for economic growth in Britain in light of the vote.

Brexit was a close call
Polls ahead of the vote had shown a close race, and the momentum had increasingly appeared to be on the “remain” side over the last week. But in an election Thursday marked by notably high turnout —72 per cent of the more than 46 million registered voters—“leave” won with 52 per cent of the votes.

Scotland’s First Minister Nicola Sturgeon said a second Scottish referendum on independence from the United Kingdom is now “highly likely.” Scotland voted in 2014 to remain a part of the U.K. but that decision was seen by many as being conditional on the U.K. remaining in the EU.

Leaders from across the EU voiced regret at the British decision. Germany called top diplomats from the EU’s six founding nations to a meeting Saturday, and the president of the European Council, Donald Tusk, said the bloc will meet without Britain at a summit next week to assess its future. Tusk vowed not to let the vote derail the European project.

But already, far-right leaders in France and the Netherlands were calling for a similar anti-EU vote.

The referendum showed Britain to be a sharply divided nation: Strong pro-EU votes in the economic and cultural powerhouse of London and semi-autonomous Scotland were countered by sweeping anti-Establishment sentiment for an exit across the rest of England, from southern seaside towns to rust-belt former industrial powerhouses in the north.

Indeed, the vote constituted a rebellion against the political, economic and social establishment. All manner of groups had written open letters warning of the consequences of an exit. U.K. Independence Party leader Nigel Farage called the result “a victory for ordinary people against the big banks, big business and big politics.”

The result triggers a new series of negotiations that is expected to last two years or more as Britain and the EU search for a way to separate economies that have become intertwined since the U.K. joined the bloc on Jan. 1, 1973. Until those talks are completed, Britain will remain a member of the EU.

Exiting the EU involves taking the unprecedented step of invoking Article 50 of the EU’s governing treaty. While Greenland left an earlier, more limited version of the bloc in 1985, no country has ever invoked Article 50, so there is no roadmap for how the process will work.

Authorities ranging from the International Monetary Fund to the U.S. Federal Reserve and the Bank of England have warned that a British exit will reverberate through a world economy that is only slowly recovering from the global economic crisis. The European Union is the world’s biggest economy and the U.K.’s most important trading partner, accounting for 45 per cent of exports and 53 per cent of imports.

In addition, the complex nature of Britain’s integration with the EU means that breaking up will be hard to do. The negotiations will go far beyond tariffs, including issues such as cross-border security, foreign policy co-operation and a common fisheries policy.

It will also affect the ability of professionals such as investment managers, accountants and lawyers to work in the EU, threatening London’s position as one of the world’s pre-eminent financial centres. The U.K. hosts more headquarters of non-EU firms than Germany, France, Switzerland and the Netherlands put together.

Associated Press writers Raphael Satter and Frank Jordans in London and Shawn Pogatchnik in Dublin contributed to this report.


Related Stories
Estimates of Brexit risk range from global calamity to ‘no big deal’
OECD warns against so-called ‘Brexit,’ calling it equivalent to a new tax
Brexit throws decades-long movement toward integrated markets, free trade into question
Brexit and Canada: 5 things to know and a few others to think about