Bombardier must keep jobs, R&D and HQ in Canada if it wants $1B bailout, says Navdeep Bains

by Pierre Saint-Arnaud, The Canadian Press, with files from Canadian Manufacturing.com  May 6, 2016 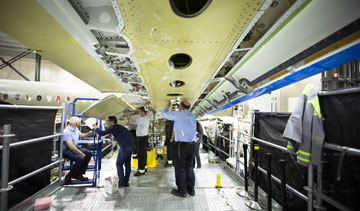 In 2014 Bombardier laid off 1,700 employees from its aerospace division, mostly in Montreal. PHOTO Bombardier

LONGUEUIL, Que.—The federal economic development minister is suggesting Bombardier must keep jobs and its head office in Canada as well as maintaining R&D if it is to get US$1 billion from Ottawa.

Navdeep Bains says negotiations are continuing between the government and the aerospace giant with regard to the Montreal-based company’s request for the money.

The Montreal-based firm in February of this year announced 7,000 job cuts—2,830 jobs in Canada including 2,400 in Quebec. Nearly half of all those cuts would be at Bombardier Transportation, its rail division.

In January 2015 Bombardier Inc. halted production of its Learjet 85 business aircraft due to weak global demand, affecting about 1,000 jobs in the United States and Mexico.

In 2014 Bombardier announced 1,700 job cuts in its aerospace division, mostly in Montreal, in an effort to cut costs amid early CSeries delays and a tough market for its business jet division.

Bains refused to discuss Bombardier’s voting structure—an issue that is an apparent sticking point with Ottawa in its talks with the aerospace giant.

Bombardier’s founding family reiterated last week it has no intention of changing the voting structure that allows it to maintain control of the company.

Pierre Beaudoin, the executive chairman of the board, said the current setup allows Bombardier to invest long term and prevents the company from being dismantled.

Beaudoin is a member of the Beaudoin-Bombardier family that controls the company with 53.23 per cent of the voting rights through its multiple voting shares.

Bains again noted that Bombardier has 950 suppliers and that the aerospace sector employs 180,000 people and contributes $29 billion to the national economy.

“The aerospace sector has a significant impact in Ontario, in British Columbia, in Atlantic Canada,” he said. “It truly has national implications. Bombardier is not only a Quebec company, a Montreal company, but it is a strong Canadian brand.”

Bains said protracted negotiations are not abnormal given the circumstances.

“It’s not something we can automatically announce on our own,” he said. “We have to engage the company in a way they accept and work with us as well on that solution…They understand we want to advance the public interest.

The Quebec government announced last October it would invest US$1 billion in Bombardier to help its CSeries program and challenged Ottawa to match.

Bains noted the federal government has contributed $1.3 billion to Bombardier over the last five decades in either grants or loans.

The company last week signed a lucrative deal with Delta Air Lines for 75 CS100 aircraft with options for another 50 planes. The order for the 75 planes is worth US$5.6 billion, though that’s based on the list price and Delta is expected to have received a discount.