The order by Republic Airways, which is currently in bankruptcy protection, has been relegated to Bombardier's backlog 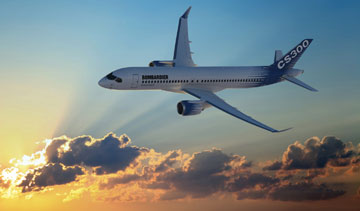 MONTREAL—Bombardier has removed insolvent Republic Airways from the CSeries production schedule until it gets a clearer picture of the impact of the airline’s bankruptcy proceedings.

The Montreal-based aircraft manufacturer says Republic’s firm order for 40 CS300 aircraft placed six years ago remains in its backlog, but that it no longer has firm dates when the planes will be built.

Industry observers have long questioned the viability of the order with Republic since it changed its business model.

The planes were originally intended for former subsidiary Frontier Airlines, but that was sold in 2013, leaving the 120- to 160-seat planes too large for its remaining operations.

Spokeswoman Marianella de la Barrera says Bombardier removed the order from its production schedule as part of an assessment of when planes for various customers will be built.

“We can’t speculate on the full impact this will have on the order but we do have a firm order in place.”

She said the production decision has nothing to do with a recent order from Delta Air Lines for 75 CS100s plus 50 options. Even though the orders are for two different planes, the production line accommodates both aircraft.