The investment represents the largest ever communications infrastructure project in Québec and is expected to bring 2,700 jobs and $2.2 billion in new economic activity to the city 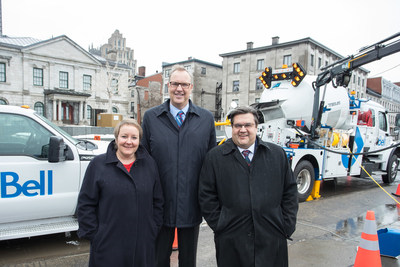 MONTRÉAL—Bell announced Mar. 27 that it will invest $854 million to bring fibre optic Internet to more homes and businesses throughout Montréal.

The investment represents the largest ever communications infrastructure project in Québec.

Based on the results of similar projects in Québec City, Toronto and other major urban centres, Bell estimates the Montréal project will create approximately 2,700 direct and indirect jobs in Québec and an additional $2.2 billion in new economic activity.

Bell’s expansion will install more than 7,000 km of new fibre and upgrade 25 central offices across Montréal.

More than 90 per cent of Bell’s network in the city is on aerial structures already in place, which will help to speed the deployment of the new fibre links.

“Our plan to directly connect more than a million homes and businesses here with the fastest broadband fibre technology will ensure Montréal’s place at the forefront of global Smart Cities,” said George Cope, president and CEO of Bell Canada.

“There is a direct and positive correlation between access to an ultra-fast Internet network and a community’s economic development. Especially for a city like Montréal, known for its dynamic digital sector and the expertise of its cutting-edge industries like video gaming, aerospace and health technologies, today’s announcement packs tremendous economic potential,” said Denis Coderre, Mayor of Montréal.