Forecasters are attributing a preliminary reduction of GDP estimates of between 0.1 to 0.2 per cent to the economic damage cause by the Fort Mac wildfire 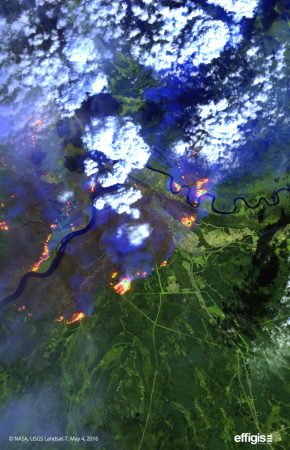 OTTAWA and Calgary—The effects of the enormous Alberta wildfire on the ever-crucial oil sector have prompted forecasters to trim their 2016 economic growth predictions for the entire country.

Experts, including those from several big banks, have shaved their outlooks in recent days following the huge blaze that tore through Fort McMurray—the heart of oil country.

The emergency forced nearby oilsands facilities to shut down last week, but some have begun to restart their operations. More are expected to get back to work over the coming days.

But even temporary closures in the economically important industry are expected to have an impact on the nationwide real gross domestic product.

In many cases, the updated real GDP projections also reflect disappointing economic data releases in recent weeks for trade and the labour force.

Since the fire, TD knocked its 2016 real GDP projection down to 1.6 per cent from 1.9 per cent—0.2 percentage points of which it attributed to the wildfire.

BMO clipped its prediction to 1.6 per cent from 1.8 per cent—evenly dividing the blame for the drop between the poor economic numbers and the disaster.

CIBC lowered its outlook from 1.6 per cent to 1.5 due entirely to the fire.

At this early stage, however, economists stressed that their predictions remain in flux as officials and companies gain a better understanding of the situation.

“Anyone who is doing this today is still making some big guesses about how the oil facilities and the rest of the town are going to come back,” CIBC chief economist Avery Shenfeld said.

Forecasters expect the wildfire to contribute to flat growth or even a contraction in the second quarter of the year. They now expect the economy to rebound with stronger growth in the third quarter.

BMO chief economist Doug Porter said losing activity early in a given year, even if it’s regained later on, usually means the economy will still suffer a slight loss for the year as a whole.

Still, the disaster and the production shutdowns were severe enough to compound ongoing troubles in a province that has been Canada’s economic engine for years.

Before the fire, the provincial and federal treasuries were already under intense fiscal pressure from still-low oil prices that started to plummet nearly two years ago.

Both governments are expected to allocate large sums to cover the costs of things like firefighting and reconstruction.

But even with the unexpected wildfire costs, Porter still expects the Ottawa’s 2016-17 shortfall to be smaller than the projection of nearly $30 billion outlined in the budget.

“I would say it’s early days yet to talk about the fiscal implications, although I suspect the federal government will contribute heavily,” Porter said.

“I don’t dare put a figure on it at this point.”

Natural gas to start flowing within days
Enbridge Inc. says its regional pipeline system for the Alberta oilsands will likely be back to full capacity within a matter of days, given the diminished risk from wildfires that have devastated the Fort McMurray area.

The Calgary-based company says it reduced the pipeline system’s capacity as a precaution by about 900,000 barrels per day on May 4.

Enbridge says it can’t accurately estimate the short-term impact of the disruption on its financial performance but it isn’t expected to have a significant effect on its 2016 full-year results.