Invictus is not the first Canadian firm to attract a bona fide U.S. music icon as a cannabis investor and public influencer

Last week, the weed grower opened the TSX Venture Exhange in Toronto with KISS bass player and rock legend Gene Simmons as its new “chief evangelist officer.” The company even changed its share ticker to “GENE”

Simmons then toured the company’s construction site at its AB Labs, a key expansion to its facilities near Hamilton, Ont.

“I joined Invictus to become a part of a great company. And to play a role in this dynamic industry,” said Simmons.

“I’m already learning so much, and eager for more. This industry is in full-ferment in Canada, and Invictus is taking all of the right steps as Canada moves closer towards full legalization. It’s exciting.”

AB Lab’s Phase 2 construction adds 40,000 sq. ft. of canopy to the existing 15,600 square feet of cultivation space. The combined facility contains multiple rooms for cultivation, trimming and drying in a controlled and regulated environment, and plays a critical role in Invictus’ production profile.

“The progress at AB Labs has been a triumph from the beginning, and stands as a testament to savvy project management,” said Invictus Chairman and CEO Dan Kriznic. “Given his decades of experience managing highly successful business efforts in such a wide variety of fields—music, merchandising, restaurants and more—I was thrilled to introduce Gene to the experienced staff that work at AB Labs.”

Invictus is not the first Canadian firm to attract a bona fide U.S. music icon as an investor and public face of the company.

Canopy Growth Corp., which grows medical cannabis in a massive plant in Smiths Falls, Ont. that was abandoned by chocolate maker Hershey in 2014, signed an investment deal in 2016 with rapper Snoop Dogg. 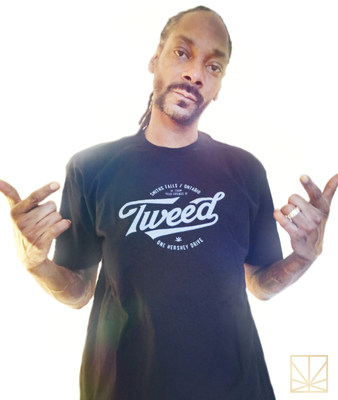 “There are real social and medical benefits from the cannabis industry, and the world is seeing this positivity in a whole new way,” said Snoop. “Canada has been at the forefront of the business model, and I look forward to being a part of the road ahead.”

Under the partnership, Snoop, through a controlled company, and Canopy-owned Tweed Inc. partnered on curated content and brand strategy exclusively in Canada. The license agreement is for an initial three-year term with a two-year extension. As partial consideration for the arrangement, the controlled company receives a combination of shares, royalties, and money over the course of the agreement.