"When you have a price differential that's up around $42, $50 even, that's a massive challenge to local industry, to the livelihood of a lot of Albertans. I hear that very, very clearly," said the PM 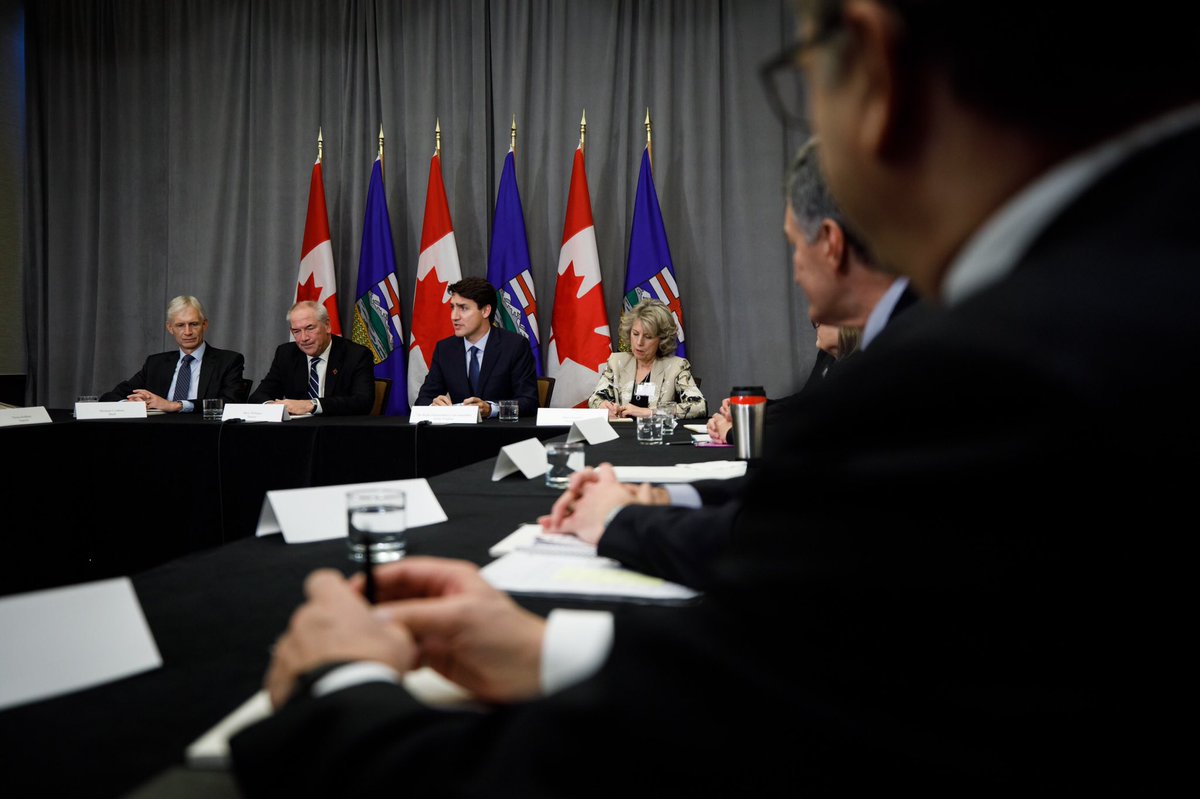 Trudeau said the oil and gas sector should benefit from his government’s announcement Wednesday that companies will be able to immediately write off capital investments. PHOTO: Justin Trudeau/Twitter

CALGARY—Prime Minister Justin Trudeau says Alberta is in a crisis as the province’s oil is being sold at a discount of about $45 a barrel, but he and some oil company bosses agree there are no easy fixes Ottawa can offer.

“There is no question that folks in Alberta, folks here in Calgary, are living through extremely difficult times. This is very much a crisis,” Trudeau said Thursday following an affordable housing announcement.

“When you have a price differential that’s up around $42, $50 even, that’s a massive challenge to local industry, to the livelihood of a lot of Albertans. I hear that very, very clearly.”

Premier Rachel Notley has said the price gap between Canadian and U.S. crude is costing the Canadian economy $80 million a day.

Hundreds of pro-oil protesters shut down part of the street outside the hotel where Trudeau addressed the Calgary Chamber of Commerce.

Inside, chamber CEO Sandip Lalli grilled Trudeau on what Ottawa intends to do, including possibly investing in moving crude on trains as a stop-gap measure as new market-opening pipelines remain in limbo.

“Currently, the federal government doesn’t have a plan to address the $80 million that’s coming out?” Lalli asked Trudeau in a question-and-answer session.

“You think there’s a super-simple easy answer and there’s not. There’s a multifaceted complex issue and as much as there is a tendency out there in the world to give really simple answers to really complex questions, unfortunately the world doesn’t work like that,” Trudeau replied.

“We need to make sure that we’re moving forward in the right way and that is where actually listening to the experts is sort of the best way to make policy.”

Trudeau said the federal government is doing what it can to get the Trans Mountain pipeline expansion built, which would triple its capacity to carry oil to tankers on the west coast.

The federal government bought Trans Mountain and its expansion project for $4.5 billion last summer only to have the Federal Court of Appeal strike down its approval, citing inadequate Indigenous consultation and failure to consider impacts on marine environment.

Trudeau said the sector should benefit from his government’s announcement Wednesday that companies will be able to immediately write off capital investments.

“The accelerated capital cost allowance doesn’t matter with differentials where they are because nobody’s going to spend any money,” said Canadian Natural Resources Ltd. executive vice-chairman Steve Laut following an energy-boss roundtable with the prime minister.

Laut said Trudeau seemed to appreciate how dire the situation is and was receptive to ideas. But Laut said he’s skeptical a federal investment in crude-by-rail, as the Alberta government has urged, would deliver swift relief.

“I don’t know what more the federal governments can do that companies ourselves can’t do,” Laut said. “Getting (rail) cars is tough to do. It takes time to build these things.”

“I think the issue that we’ve all been debating is more of a provincial issue,” he said. “It’s very tough for the federal government to solve that one for us.”