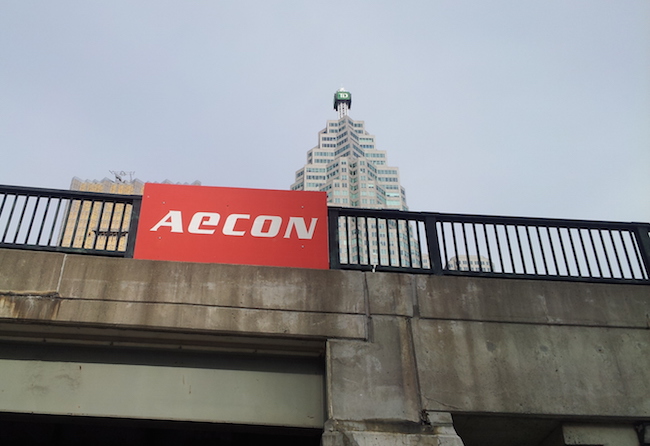 Toronto-based Aecon and its predecessors have been involved in a number of landmark construction projects in Canada, including the CN Tower, the St. Lawrence Seaway and the Vancouver SkyTrain

TORONTO—Aecon Group Inc.’s stock price soared late last week after the Canadian construction firm confirmed it has engaged BMO Capital Markets and TD Securities to look into a possible sale of the company.

“Any transaction would be intended to create shareholder value and enhance the company’s capabilities and growth potential,” Aecon said in a statement.

The company made the disclosure after regulators halted its stock because of a spike in its volume and price, but cautioned there is no guarantee that the process will lead to any agreements or a sale.

Desjardins Capital Markets analyst Benoit Poirier said in a note that the “clearly undervalued” company is an attractive takeover target given its strong balance sheet, solid exposure to Canadian infrastructure opportunities of up to $40 billion, and because it has been without a CEO since November 2016.

“In our view, diverse engineering and construction firms could be interested in (Aecon’s) assets given the strong bidding pipeline, especially U.S. contractors,” said Poirier.

Raymond James analyst Frederic Bastien said in a note that U.S.-based companies would likely be too focused on their own markets to contemplate a move north, but that some European firms with Canadian experience could be interested.

“It would have to be a company that recognizes the potential in Aecon’s infrastructure and nuclear refurbishment activities and sees upside in Canada’s oil, gas and natural resources sectors.”

On the timing of the move, Bastien speculated that while the lack of a CEO might have spurred the company’s search, the board had more likely been approached with an offer.

Bastien put out an estimated takeover price of about $23.50 per share, while Poirier put the price at about $21 even.

Aecon and its predecessors have been involved in landmark construction projects in Canada including the CN Tower, the St. Lawrence Seaway, the Vancouver SkyTrain and the Halifax Shipyard.

The company has divisions in construction, mining, energy and infrastructure, with headquarters in Toronto, Calgary, and Vancouver.