Why are homes still being built along rivers? Flooded residents disagree on the solution

Calgary and many other cities, including Montréal, Vancouver, Myrtle Beach and Houston, continue to build houses in areas that hydrologists and engineers have designated as being high-risk for flooding.

December 2, 2021  by Timothy J. Haney Professor of Sociology and Board of Governors Research Chair in Resilience & Sustainability, Mount Royal University 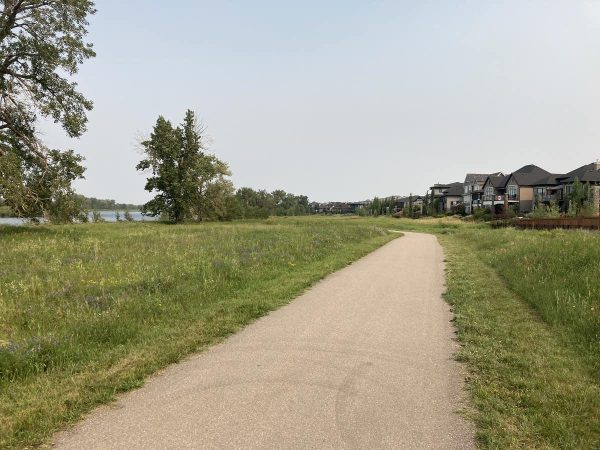 Like many residents living near Calgary’s rivers, Irene’s house flooded in June 2013 when heavy rainfall melted the snowpack in the Rocky Mountains, inundating much of southern Alberta in what was, at the time, the costliest disaster in Canadian history.

Irene watched as her belongings floated down the street. Everything in her basement and the first level of her home had to be discarded into a trash pile in her front yard.

Reflecting on this trauma and her home’s devastation, she said: “Developers get away with a lot of shit they shouldn’t get away with.” She recalled arguing years earlier with the developer about how close to the river it planned to build the houses, and wondered if it might have been worse had her home been built as close to the river as initially planned.

I was part of a team studying housing, environmental views and hazards who interviewed residents of Calgary’s flood-affected neighbourhoods. Remarks like Irene’s were common.

Calgary and many other cities, including Montréal, Vancouver, Myrtle Beach and Houston, continue to build houses in areas that hydrologists and engineers have designated as being high-risk for flooding.

In most jurisdictions, home-builders are not financially liable for flooding for very long. In Alberta, the window of liability is one year, at which point the risk is transferred to homeowners. Following floods and other disasters, research shows that the development of new housing does not slow but intensifies, as flooded properties lose value, are bought by developers and, as memory of flooding fades, become lucrative investments.

The residents’ point of view

The residents I spoke with viewed developers as myopic capitalists who choose profit over safety. Scott told me that while developers are responsible for driving the hazard risk, “You can’t blame the developers, they are … there to make bucks, right? And if the city says you can build there then, bingo!… They make a pile.”

Surprisingly, even though their homes had been flooded, residents were not angry at developers for situating the houses close to a hazard. Rather, they were resigned to it.

When asked what they thought should be done to keep people safe from floods, residents had two very different suggestions.

Rachel said, “They can’t build where the city says they can’t…. It has to be government who says it can’t be done.”

Quite often, the same people who argued for better government regulations on floodplain development also insisted that government should provide home buyers with a disclosure of a home’s location in a flood-prone area, a move that the real estate industry has dubbed “idiotic” and one that would “kill the market.”

Tasha wished she had been informed of the risk prior to buying her home, and told us, “I have lived here for 42 years and I have never heard of ‘flood fringe’ … maybe realtors should be more upfront about that.”

The flood fringe is the area adjacent to the river with measurable flood risk — usually greater than one per cent annual probability of flooding. Angela said any declaration must go beyond a simple disclosure and “explain what it means.” Many preferred this type of new regulation.

As one might expect in Alberta, a place known for right-wing populism, other participants pushed back against new regulations and said individuals must bear responsibility. They deferred to the sanctity of private property rights and their distaste for government overreach. They felt that buyers must beware, often mentioning the need for “common sense.”

Caleb said, “I think people can live wherever they want, but I think they have to carry that risk.” Others called it “instinctual.”

Sociologists, like me, are often critical of “common sense,” looking at how such taken-for-granted knowledge is a culturally dependent and contextually specific product of socialization. Still, many Calgarians did not see it this way and did not believe that the government should infringe on private property rights.

Calgary, like many cities, continues to develop new housing close to rivers. New neighbourhoods like Riverstone and Quarry Park offer housing marketed for their picturesque living and river access.

In other areas, older homes near the river are being razed to make room for infills — usually two or more homes on an existing lot. These infill developments increase the density in river-adjacent communities, putting more residents at risk.

The lack of consensus among the study participants was also noteworthy. Citizen activism tends to get mixed results in influencing government decision-making on development even when there is relative consensus. But in the case of restricting development near rivers, there is no such consensus, which may make it difficult for residents to mobilize.

My own view is that municipal governments must stand up to moneyed development and home-building interests by restricting growth near rivers, which should instead be preserved as green space.

This approach is often called “room for the river,” and is particularly popular in northern and western Europe. With this approach, areas immediately adjacent to waterways are preserved, providing esthetic and recreational value, and people are moved away via buyouts when necessary. New development is restricted. It has been imported and applied in North American cities such as Norfolk, Va., though with varying degrees of consistency and success.

The more volatile climate we are experiencing as a result of climate change will undoubtedly bring new flood events near rivers and mounting flood losses. Society must work harder to keep people and property away from the water, starting with halting new developments near these hazards. The first step in getting out of a hole, of course, is to stop digging.