What mining, oil and gas industries can learn from Sudbury, the city that went from major polluter to thriving environment

Sudbury offers proof that a healthy environment doesn’t have to come at the expense of industrial activity. 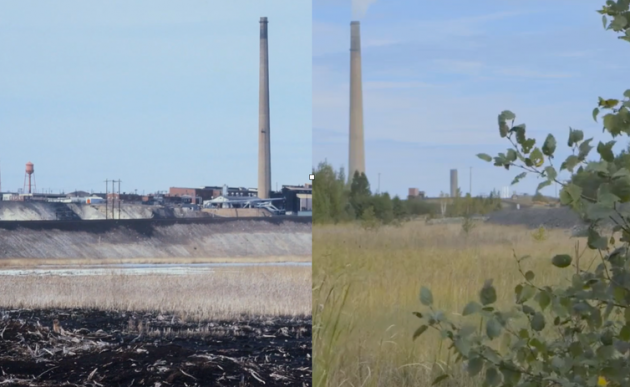 Contrast of barren land surround smelters in Sudbury in about 1970 (left) and 2015 (right). (Vale Living with Lakes Centre)

Planting trees, however, is hard work. It takes money and planning. But a re-greening roadmap exists.

Sudbury, the largest city in Northern Ontario, transformed itself after decades of environmental devastation, brought on by the mining industry. Other communities and industries, like oil and gas, can replicate the city’s efforts to aid in global efforts to fight climate change.

For almost 100 years, Sudbury’s community and environment were blanketed in sulfur dioxide and metals released from the smelting of nickel ore. The sulfur acidified the soils, rain and lakes. The pollution triggered the complete loss of vegetation, leaving barren rolling hills of blackened rock. It was a devastated landscape.

But 40 years ago, scientists, citizens, governments and mining companies in Sudbury set out with the goal that, no matter how damaged the environment was, it was worth trying to repair it. Since then, city- and industry-led programs have planted 12 million trees and revitalized over 3,400 hectares of land. People now swim and fish in the 330 lakes that fall within the city boundaries and were once highly acidic.

Today, Sudbury has some of the cleanest air in all of Ontario. That’s hard to believe given the city once emitted 2.5 million tonnes of sulfur dioxide per year. In the 1980s, the “Sudbury” became known as a unit of pollution, against which other industrial cities were measured. It’s now become known as a unit of restoration.

Sudbury offers proof that it is possible to leave a healthier environment than the one we inherited, and proof that we can change our climate for the better.

Against the realities of climate change, industrial pollution and urban expansion, stories of environmental recovery and restoration are rare. But a healthy environment doesn’t have to come at the expense of industrial activity.

While scientists developed solutions for restoring the land and water, industry re-engineered their processes to reduce and capture their emissions. Sudbury mining companies, Inco and Falconbridge (now Vale and Glencore) led the way in reducing sulfur dioxide release from their smelter. Nickel production continued to grow in spite of more stringent pollution limits.

The Sudbury situation was pivotal in negotiations between Canada and the United States that led to the signing of the 1991 U.S.-Canada Air Quality Agreement. The agreement, also known as the acid rain accord, helped solve the largest environmental issues at the time.

Without strong policy in North America and Europe, acid rain would have continued to threaten forests and fisheries in Canada and the U.S. Now, 30 years later, we can use the same approach with strong regulations on emissions, scientific evidence and solutions, and industrial re-alignment to capture carbon dioxide emissions and make the critical strides needed to meet climate change targets.

Sudbury hasn’t solved all of its problems. It still carries a legacy of millions of tonnes of reactive mine waste materials, which can release acids and metals that can contaminate food webs and drinking water. These have to be managed by industry to avoid impacting the environment and surrounding communities.

Vale and Glencore are working with scientists again to develop new ways of treating, covering and restoring these vast tailings ponds. They are looking for ways to turn these barrens into areas for carbon capture, to grow biofuel crops or to use the land for renewable energy installations.

In some cases, these wastes still contain low levels of metals that could not be extracted in the smelter. But we now have the means to capture these metals through low-energy technologies or using bacteria to extract metals from minerals.

The global demand for critical metals like nickel, cobalt and copper is growing to support production of electric vehicles. In the next 25 years, the world will need as much copper as was mined in the past 500 years, according to Rio Tinto, one of the world’s largest metals and mining companies. Some of that demand can be met using waste.

We cannot meet climate change targets without transitioning away from fossil fuels, but we cannot produce renewable energy technologies like batteries and solar panels without mining the minerals used to make them. We can’t let one set of environmental issues replace another.

But we don’t have to, and the history of Sudbury shows the way. Community, government, academia and industry can work together to face a massive challenge like climate change.

We need to focus on scientific solutions and move away from the old ways of doing things because “that’s how it’s always been done.” Net-zero and zero-waste mining is possible — and necessary. They are ultimately part of a sustainable energy future.

At the start of this UN Decade on Ecosystem Restoration, the Sudbury model is an important recipe to apply to climate change. Where we once sacrificed the environment for the sake of industrial expansion, we now need to transition to smarter industrial processes to protect the environment, wean ourselves off fossil fuels and build a more resilient global community in the face of climate change.