What happened to the AstraZeneca vaccine? Now rare in rich countries, it’s still saving lives around the world

by Michael Head, Senior Research Fellow in Global Health, University of Southampton  May 24, 2022

In the longer term, we need a vaccine that can protect against multiple variants or even all coronaviruses. 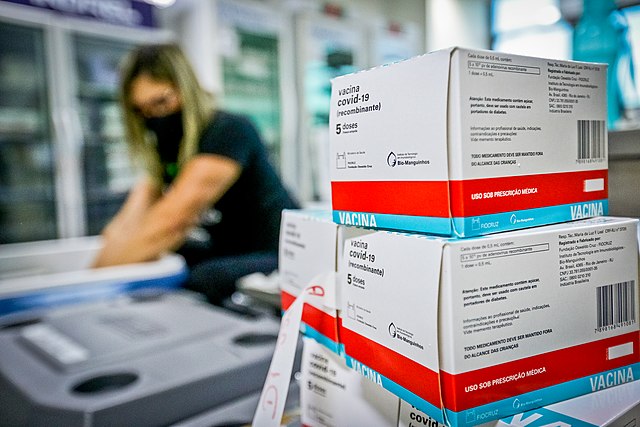 The AstraZeneca vaccine, developed in partnership with the University of Oxford, was one of the first vaccines available for use in the UK and around the world during the COVID pandemic.

More than two billion doses have been distributed to at least 170 countries, with around 50 million doses administered in the UK.

But most of those were first and second doses – only a little over 56,000 doses of AstraZeneca had been given as booster doses as of May 2022. The vast majority of third doses administered in the UK have been Pfizer (30.1 million doses) and Moderna (9.4 million).

So despite being an excellent vaccine, the use of AstraZeneca in the UK has declined across the pandemic. It’s also not used much elsewhere in Europe, or in the US where it has yet to be approved.

The reason for its limited use in high-income countries could be a combination of two factors. First, it’s likely that the mRNA vaccines (specifically those manufactured by Pfizer and Moderna) are perceived to be even more effective than AstraZeneca. And second, the vaccine’s reputation took a hit when some people who received this vaccine subsequently developed blood clots.

On the first point, some research has indicated the mRNA vaccines offer slightly higher levels of protection against previously dominant variants, including delta. A 2022 study from the Netherlands that measured antibody levels against SARS-CoV-2 following vaccination showed Pfizer and Moderna performed better than the viral vector vaccines (including AstraZeneca). But one caveat here is that the participants who received the mRNA vaccines were much younger than the AstraZeneca recipients. Immune responses typically wane faster in older populations.

The public fallout from the blood clot scares, associated with AstraZeneca but not with Pfizer or Moderna, also affected the vaccine’s rollout. The vaccine is still licensed for use in younger adults in the UK, who were deemed to be at higher risk of blood clots following the AstraZeneca vaccine. However, the UK’s Joint Committee on Vaccination and Immunisation recommended that people aged 39 and under should be offered an alternative to AstraZeneca where possible.

These adverse events gained significant media coverage, and public confidence in the AstraZeneca vaccine was certainly knocked in the UK and beyond. For example, in April 2021, Denmark became the first European country to cease using the vaccine, with Norway following soon after. Around the same time, several Canadian provinces temporarily suspended the AstraZeneca vaccine for people under 55 as a precautionary measure. All of this came amid high levels of COVID in these countries and elsewhere, and at a time when global demand for COVID vaccines greatly outstripped supply.

These somewhat kneejerk reactions made waves further afield. For example, research my colleagues and I conducted in Ghana highlighted how people had observed the responses in Europe and North America. The result was increased hesitancy towards the AstraZeneca vaccine.

Despite all this, the UK’s Medicines and Healthcare products Regulatory Agency, the European Medicines Agency and the World Health Organization continued at all times to recommend the vaccine, based on its safety and effectiveness record.

An important vaccine for the developing world

The proportion of the Ghanaian population that has received one or more doses of any COVID vaccine is just over 30%. Our 2022 research in Ghana indicates that vaccine hesitancy rates among those currently unvaccinated ranges between 30%-50%, depending on the population surveyed.

An April 2022 briefing by the Ghana Health Service (not published online) indicated that 43% of the 28 million doses received in Ghana have been AstraZeneca. Of the vaccines administered in March 2022, 57% were AstraZeneca.

Among the reasons for a preference for AstraZeneca, there will be considerations around supply, cost and logistical issues. For example, the vaccine requires only regular refrigerator storage, compared with the mRNA vaccines which need to be frozen. For these reasons the AstraZeneca vaccine is vital for Ghana, along with many other lower-income countries. High local and global confidence is essential to ensure a successful vaccination campaign with high uptake.

The UK and many other high-income countries are likely to continue predominantly using mRNA COVID vaccines. However, much of the knowledge we have around “which vaccine is better” relates to previous variants rather than omicron. As the virus continues to evolve, so must the evidence base.

There is an increasing body of evidence that “mixing and matching” vaccine types is safe and effective, and may even generate stronger or broader immune responses over time. In this light, there could be a role for AstraZeneca or other vaccines such as Novavax, alongside mRNA vaccines.

In the longer term, we need a vaccine that can protect against multiple variants or even all coronaviruses.

For many high-income countries in 2022, the mRNA vaccines are the vaccine of choice, rather than AstraZeneca. The mRNA vaccines are also being manufactured in sufficiently large volumes to make supply much less of an issue than it was earlier in the pandemic. These are all important factors for national decision-makers. However, it’s important to emphasise that the AstraZeneca vaccine is a safe and effective product, and remains a vital tool to underpin the global response to the pandemic.