What a Trump win or loss will mean for feminism

Seldom has a U.S. election featured such a gender divide with such huge consequences for feminism hanging in the balance

November 2, 2020  by Peggy Nash, Senior Advisor to the Dean of the Faculty of Arts + Labour Management Relations, Ryerson University 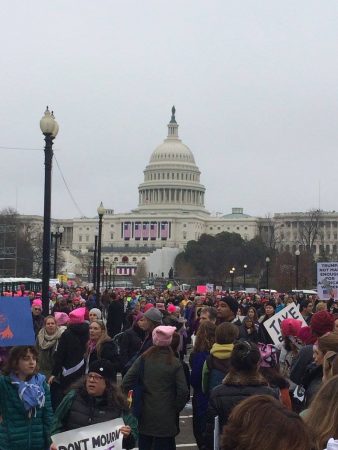 In the United States, polls are pointing to a Joe Biden, Kamala Harris win on Tuesday. Media pundits are unusually cautious about polls and projections about the election outcome, and women want so badly to see the end of the “pussy-grabber-in-chief” that they almost dare not give voice to their dire wish.

If Donald Trump loses the election, he will blame everyone but himself.

If Biden becomes the next president, he needs to show women that he understands the value of their votes by making his campaign promises for women a reality. A Biden win signals to women that all their organizing, fuelled by anger and opposition to the Trump presidency, has paid off.

A Trump win, on the other hand, will be demoralizing, and the anger from citizens will be unpredictable. It may once again lead to massive protests, organizing and a determination to block him that is even more fierce than before. But that anger might also turn inward in a depressing spiral as people disengage from politics and deal with profound sadness. Hopefully, that demobilization is short-lived.

Seldom has a U.S. election featured such a gender divide with such huge consequences for feminism hanging in the balance. As a former MP and leadership candidate, I teach a course that encourages young women to get involved in politics. A Trump loss signals to them that women’s votes really do matter.

First and foremost, a Trump loss signals that the indefatigable efforts of American women to defeat this president have paid off. White working class and suburban women were criticized for supporting Trump in 2016. Immediately after Trump’s inauguration, the feminist resistance took hold, with women marching across the United States. The women’s marches of January 2017 were some of the largest demonstrations in the country’s history. Women who never thought they would attend a rally came out to protest.

Women like Ilhan Omar, Ayanna Pressley and Alexandria Ocasio-Cortez have added their strong voices to public civic life and in the policies of the Democratic Party. Grassroots organizers from #MeToo and #BlackLivesMatter mobilized tens of thousands of new activists. If this organizing pays off on Tuesday, and Trump is defeated, activists across the country will have wind in their sails and a spring in their step.

A Trump loss will steer the U.S. towards a better COVID-19 playbook. The pandemic has disproportionately impacted marginalized women — both medically and economically. It has sparked what some are calling a “she-cession.” A Trump loss would likely mean added attention to assisting women workers and providing family support, and possibly a much-needed infusion of funds.

A Trump defeat also means the U.S. elects its first woman and its first racialized vice-president. This will be a huge morale boost for feminist movements and Harris will be a role model for everyone as a woman of colour takes on the second-highest job in the land.

This may be especially inspiring for racialized American women who are disproportionately suffering from COVID-19 and economic inequality right now. Racialized women have traditionally voted Democrat.

With the appointment of right-leaning Amy Coney Barrett to the U.S. Supreme Court, the president has tried to ensure he survives, zombie-like, past any political death. Her appointment doesn’t change if he’s defeated. But one way to try to defend Democratic priorities important to women, such as Roe vs. Wade and Obamacare, would be to see if her appointment could be buffered by a President Joe Biden expanding the size of the court and appointing additional judges.

A second Trump term would be demoralizing for millions of women. Many will ask how far their country can regress and unravel before righting itself.

Some will ask if the U.S. has not already fundamentally changed with respect to democracy and human rights to the point that it’s unrecognizable. The thought of four more years of unravelling may be too unbearable to contemplate.

With abortion rights, Obamacare, housing policy and so much else at stake at the U.S. Supreme Court, a Trump second term would likely increase economic, racial, gender and democratic polarization. Many women fear not only a loss of rights but a loss of democratic freedoms and civil liberties.

Perhaps the worst outcome of a Trump win would be his triumphalism in the face of so much hard work and organizing by women to defeat him. He would not be able to resist a boastful Twitter campaign extolling his brilliance and charm.

Women are not monolithic. Trump still has many women supporters. But many other women have poured their hearts and souls into fighting for a better future. And most of them believe this hinges on a Trump/Mike Pence loss and a Biden/Harris win. If their goal becomes a reality, the new administration will need to signal that it understands who was key to putting them in office and recognize their priorities.