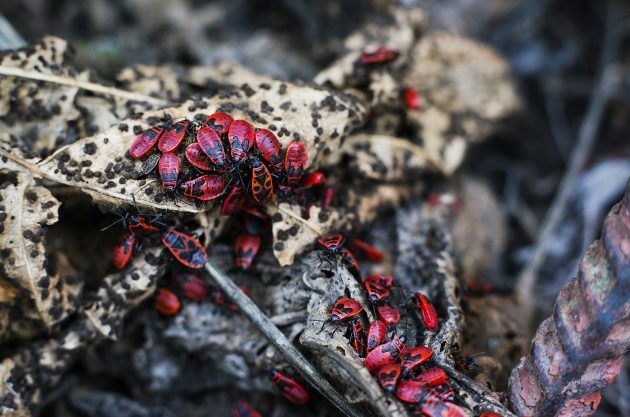 In mid-July, Reddit user erako shared a photo of some exotic-looking insects, curious as to what they were.

The insects seemed out of place for Mississauga, Ont. — they were bright red, covered with black bands and spangled with white stars.

The original poster couldn’t have anticipated the panicked messages and emergency emails that would ripple out across the internet and through multiple Canadian government agencies in response.

The insect was swiftly and correctly identified by the Reddit community as the spotted lanternfly (Lycorma delicatula), an invasive insect that has been spreading outward from southern Pennsylvania since its accidental introduction in 2014.

Across Canada, entomologists, conservationists, farmers and foresters have anxiously watched for it. This pest feeds on the sap of more than 70 species of trees, shrubs and vines, robbing the plant of energy and providing opportunities for fungal diseases to colonize. Costs associated with lost crops, damaged plants and pest control can be substantial, with yearly harvests or entire orchards being lost.

Fortunately, it was a case of mistaken location: the photo had originated in New Jersey, not Mississauga. For the time being, Canada has avoided another insect invader.

The incident, however, served as a successful test of the important role social media and a whole nation of community scientists are playing in the detection and identification of introduced species.

Using the power of social media for natural history

People of all ages are taking to social media to connect with other naturalists. From Whatsthisbug on Reddit (which boasts 245,000 members), to the thousands of active entomologists on Twitter, to the hundreds of groups dedicated to insect identification on Facebook such as Entomology (146,000 members) and Insect Identification (62,000 members), social media are enabling biodiversity conversations.

Additionally, we are learning more about species familiar to us. Species’ ranges (the area where a species is found) and life histories are being monitored by a global community emboldened and enabled to share their findings for the world to enjoy. Scientists are actively participating as well, creating programs to answer questions about spiders and recruit volunteers to find bumblebees or collect forest pests.

Alongside the big social media networks, a website that has quickly established itself for natural history documentation is iNaturalist. A joint initiative of the California Academy of Sciences and the National Geographic Society, iNaturalist has become a world-leading resource that combines observational data with artificial intelligence and community expertise to bring natural history into the digital age.

iNaturalists are already on the case

iNaturalist is already helping identify invasive urban landscape pests in Ontario. The European firebug (Pyrrhocoris apterus), a brightly coloured bug that feeds on linden trees and hibiscus plants, was first identified in Canada by Paula Oviedo Rojas, a student at the University of Guelph, in her Etobicoke, Ont., backyard in 2017. A year later across town, backyard naturalist Karen Yukich discovered the box tree moth (Cydalima perspectalis) in her garden. While this moth has been causing significant damage to boxwood shrubs across Europe, this observation marked its first known record in North America.

Both species have since been observed spreading across the Greater Toronto Area by iNaturalists whose observations are helping researchers understand how invasive species move through urban landscapes.

Natural history in the digital age

As natural history goes digital, it is experiencing a renaissance. Natural history — one of biology’s oldest disciplines — is often trivialized as an outdated pastime, and not a true scientific discipline, even though it underpins much of modern biology.

The proliferation of smart phones means many people have an encyclopedia of knowledge, a high-resolution digital camera and GPS in their pockets. The curious are being transformed into community scientists who contribute vital data and observations from their local parks, backyards and city streets.

The Canadian government is constantly on the lookout for potential new arrivals that can harm natural resources or decimate crops, and social media-connected community scientists are swiftly becoming our first line of defence. Major pests like the wooly hemlock adelgid, the spotted lanternfly, the khapra beetle or the Asian long-horned beetle are all likely targets for community detection.

So, as you move through your day, take a closer look at the insects and other organisms that share your environment. When something catches your attention, take a photograph and share it with the internet — your observation could be more significant than you may realize.