Mountain goats are affected by the changing climate, research finds 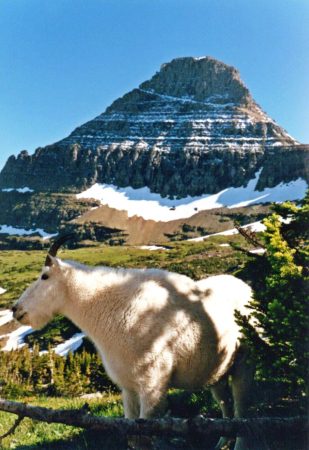 Seeing a mountain goat in the wild of southeast Alaska for the first time, with its stark white coat and graceful posture against a lush green mountain landscape, is an unforgettable experience.

Like many species across the globe, mountain goats are affected by the changing climate. With the warming environment, we are witnessing some species expanding their range north and to higher altitudes. Mountain goats are especially vulnerable as they are already at the northern limit of their range.

In my PhD research, I use genetic data to study the ecology and evolution of the North American mountain goat (Oreamnos americanus).

Genomics is a relatively new and rapidly growing field that investigates the complete DNA sequence present in every cell. It offers new insights into how organisms function, adapt to their environment and evolve over time. As the cost of sequencing technologies has decreased, the number of wild genomes identified has grown. CanSeq150 and Genome 10k are examples of initiatives with the aim of sequencing large numbers of new genomes.

After identifying — or assembling — a species’ genome, the next step after genome assembly is annotation, which is the process of looking for coding segments of DNA and assigning them to a function, for example digestive enzyme production.

In mountain goats, the genes coding for ferroxidase activity — the process of creating red blood cells to maintain a constant supply of oxygen to tissues in the body — are over-represented. Those genes could potentially help the goats to adapt to the alpine environment they live in.

Mountain goats are not true goats — they are more closely related to muskox and chamois. A comparative study using a small number of well-known genes has shown that the mountain goat species split off early in the sheep-goat lineage, but the study was unable to pinpoint the exact position. Genomics can be used to reconstruct the evolutionary tree with higher accuracy and more precise time estimates of species divergence.

Like most mammals, mountain goats are diploid, i.e. each cell contains two sets of chromosomes. We inherit half of our DNA from our father and half from the mother, who in turn inherit their DNA from our grandparents. If we keep going back in time, we can eventually trace our lineage back to a single common ancestor.

Using the mountain goat genome assembly, we modelled the effective population size over the past 500,000 years, which gives us a glimpse into how the species responded to climate change in the past. The rise and fall of surface temperature was generally mirrored in the effective population size, and there was a dramatic decline during the last glacial maximum, when the ice sheets reached their maximum coverage of the Earth’s surface during the last ice age.

The main value of a genome is as a robust reference point for future analyses. By sequencing and mapping more individual genomes, we can tackle more in-depth questions about the relationship between the environment and the genotype. For example, do goats that live in warmer locations share similar genetic mutations that allowed them to adapt? Is there movement between mountain goat populations at different mountain ranges?

Assembling the genome is an exciting first step and a basis for future analyses. With an assembled species genome we can start addressing questions about a species’ past, its unique genes and taxonomy.