Russia vowed to continue its acquisition of new tanks, aircraft, missiles and navy ships despite steep financial and logistical challenges 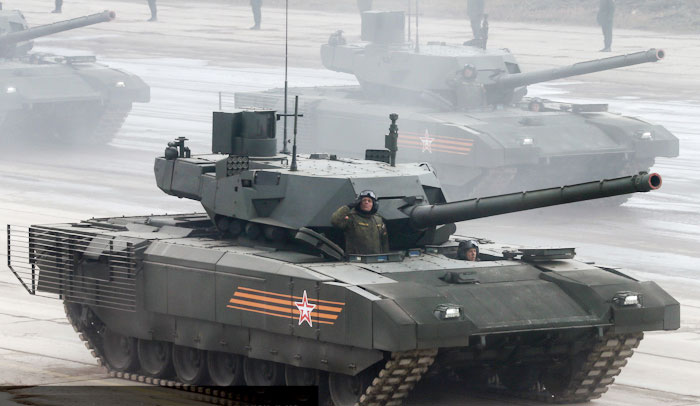 NIZHNY TAGIL, Russia—It has a remote-controlled turret, it bristles with state-of-the-art defence systems and its computerized controls make driving it feel “like playing a video game.” Russia’s Armata tank, which its creator says can be turned into a fully robotic combat vehicle, is the crowning glory of a sweeping military modernization drive that is rumbling forward amid a perilous confrontation with the West over Ukraine.

But President Vladimir Putin’s expensive arms build-up faces major hurdles as Russia’s economy sinks under the weight of Western sanctions and falling oil prices. The 22-trillion ruble (about $400-billion) program, which envisages the acquisition of 2,300 new tanks, hundreds of aircraft and missiles and dozens of navy ships, was conceived back at the time when Russia’s coffers were brimming with petrodollars.

Putin vowed that the military upgrade would go ahead as planned, and this year’s military budget rose by 33 per cent to about 3.3 trillion rubles (nearly $60 billion). Some observers predict that the Kremlin will inevitably have to scale down the plans amid a grinding recession.

In one of the first harbingers of the possible curtailment of new arms procurement, a deputy defence minister said earlier this year that the air force will likely reduce its order for the T-50, a costly state-of-the art fighter jet developed for two decades to counter the U.S. Raptor.

Another problem is also hampering the modernization drive: The sanctions include a ban on the sale of military technology to Russia. Nick de Larrinaga, Europe Editor for IHS Jane’s Defence Weekly, predicted that Russia would find it hard to replace Western military know-how.

“They have been relying on Western sub-systems, electro-optical systems is a good example, but also computer chips and things like that, which Russia doesn’t make,” he said. “How Russia goes about trying to replace these systems is going to be a really big challenge.”

The rupture of military ties with Ukraine dealt another heavy blow to Putin’s re-armament effort. Ukrainian factories had exported a wide array of weapons and sub-systems to Russia, and officials acknowledged that it would take years and massive resources to launch production of their equivalent at home. Since Soviet times, Ukraine specialized in building helicopter engines, and Putin said that Russia was setting up a capacity to produce them at home.

It could be even more challenging to substitute another Ukrainian product, ship turbines. Its refusal to deliver them has derailed the commissioning of new Russian navy ships.

Amid the tensions with the West, Putin emphasized the need for the nation’s defence industries to quickly shed their dependence on imported components.

Speaking at his office at the mammoth UralVagonZavod factory in the Ural Mountains, one of the biggest industrial plants in the world, the Armata tank’s chief designer, Andrei Terlikov described it as a “decisive step toward more advanced unmanned machines, including those which could operate autonomously in combat.”

He emphasized that the Armata uses only domestically produced parts. “From the very start, we have set the task to rely on our own resources,” he said.