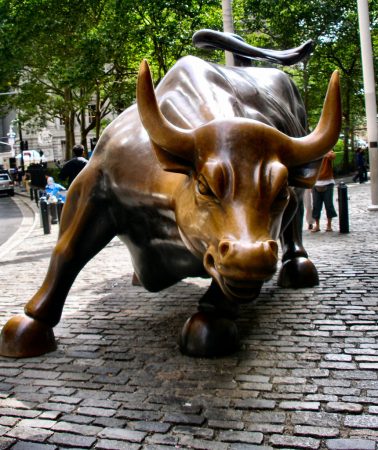 Wall Street has rewarded its most patient investors handsomely over the past 10 years. Is there more to come?

This bull market’s lifespan, the longest on record, speaks to financial markets’ resiliency in the face of a variety of shocks, including a brutal fourth quarter of 2018.

Whether the bull keeps running hinges on whether companies can continue raking in profits, a key driver of the stock market, and whether the U.S. economy can avoid sliding into a recession. Bull markets tend to whither when fear of a recession kicks in.

Profit growth for the companies in the S&P 500 averaged 25.6 per cent in the first three quarters of last year. That slipped to 13.4 per cent in the fourth quarter, but still topped expectations.

But earnings are expected to decline slightly in the first quarter and grow in the mid-single digits for the full year, according to FactSet. And the U.S. economy has been showing signs of slowing and is expected to continue to do so this year.

“The risk of recession grows,” said Sam Stovall, chief investment strategist at CFRA, noting that the U.S. economy’s current expansion will become the longest in history by the end of July.

“However, we currently see no quarterly GDP declines through the fourth quarter of 2020, let alone back-to-back declines, which have been a rule of thumb for recessions,” he said.

Meanwhile, the wild card for the market – and the economy – might be the long-running, costly trade conflict between Washington and Beijing. While reportedly on track for a resolution as early as this month, the spat continues to weigh on investors’ nerves and many companies’ plans.

The bull market has looked very vulnerable at times during its decade-long run, most recently at the end of last year. That’s when a bevy of concerns, including rising interest rates, the trade spat, slowing global economic growth and some tepid profit forecasts sent the S&P 500 into a skid that resulted in the index’s worst December since the Great Depression.

That slide culminated on December 24, when the S&P 500 closed 19.8 per cent below its all-time high. A drop of 20 per cent or more would have ushered in a bear market.

“What we’ve seen and continue to see is doubts,” said Ryan Detrick, senior market strategist at LPL. “People have doubted it the whole way up.”

And yet, the bull shrugged that off, too, and now the market is off to its best start to a year since 1991.

“It was a good-sized correction that freaked everybody out,” Detrick said. “Then the realization comes that the economy is on good footing.”

The Federal Reserve put investors at ease in January when it signalled a prolonged pause in further interest rate hikes. That calmed fears that the central bank would keep raising rates at a pace that could derail the economy.

One of the key questions in gauging the longevity of the bull market is the outlook for inflation and what action the Fed will take to try to manage it.

For now, inflation remains below the 2 per cent target used by the Fed to determine whether annual price increases are growing too rapidly. It was up 1.7 per cent in the 12 months ended in December.

As long as inflation remains at that level, the Fed has less incentive to raise rates.

The U.S. economy turned in a solid performance in 2018, boosted in part by tax cuts and higher government spending. But economic growth slowed to 2.6 per cent in the last three months of the year from 3.4 per cent in the third quarter.

Most economists envision a weaker performance for the coming months and probably years. Some expect gross domestic product to drop to a growth rate of 2 per cent or less in the current January-March period.

Investors have grown cautious about business conditions going forward as signs of weakness in the global economy have emerged. Uncertainty over trade has also helped cloud the outlook for company profits this year.

“We think the bull market is still intact,” Lefkowitz said. “And at some point, we’re likely to see new all-time highs for the broad market gauges.”


Related Stories
How the bull market kept running and stampeded the doubters
Born out of the financial crisis, U.S. bull market nears record
Alberta facing one of longest, most severe recessions in its history
Germany barely avoids recession with zero growth