As province’s debt has ballooned, per cent of workers on public dime has reached 20-year high 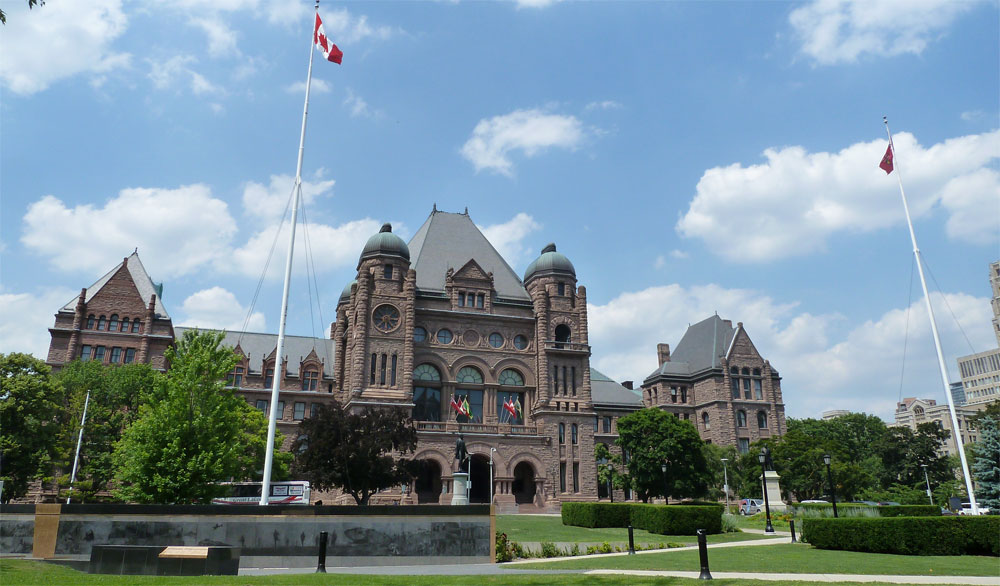 With the announcement of this year’s budget shortfall of $8.5-billion, Ontario will have run a budget deficit for eight consecutive years. PHOTO: Priscilla Jordão

TORONTO—The popular narrative at Queen’s Park is that external forces are to blame for Ontario’s lackluster economy and growing debt.

From former Premier Dalton McGuinty’s claim that a high Canadian dollar had “knocked the wind out” of Ontario’s exporters and manufacturers – something that stung provincial tax revenues – to current Premier Kathleen Wynne’s comments that the lower loonie will allow Ontario’s manufacturing sector to rebound, the Ontario government has continually pointed to the decline in manufacturing as one of the culprits behind high budget deficits that have led to a hefty pile of public debt.

At the end of May, the province’s debt was $314.5-billion, according to the Ontario Financing Authority. The figure represents 39.4 per cent of the province’s GDP and marks a more than doubling of Ontario’s debt since 2007.

“A lot of people are still hanging onto this false narrative that it’s a problem that has to do with external factors,” Niels Veldhuis, president of the Fraser Institute, said.

But the true cause of the province’s debt, according to Veldhuis, has not been malevolent forces beyond its control, but bad policy making, which has left Ontario with an unsustainable public sector and hostile investment climate.

“This is a function of Queen’s Park and poor policy being implemented at Queen’s Park – and specifically, it’s a spending problem,” Veldhuis said.

With the announcement of this year’s budget shortfall of $8.5-billion, Ontario will have run a budget deficit for eight consecutive years. It plans to balance the books by 2017-2018 – 10 years after it last registered a small surplus.

“Under the current government, I’ve long said that we don’t have a revenue problem, we have a spending problem,” he said. “We have a government that’s not focused on pro-growth policies. They’re catering to every special interest out there instead of getting the economic fundamentals right in the province.”

Even in its weakened state, the importance of the manufacturing sector to Ontario’s economy is difficult to overstate.

“I think it’s the Wayne Gretzky of the economy,” said former Liberal MPP Sandra Pupatello, who spent eight years in the Ontario cabinet as Minister of Economic Development and Trade and is now CEO of the Windsor-Essex Economic Development Corp. “It has the largest supply chain, which means there are greater inputs going into a plant than into any other sector. There may be other sectors that are larger, but there isn’t another sector that creates as much of a churn in the economy like manufacturing does.”

Despite the significant decline in manufacturing, Veldhuis argues softer output – and fewer tax dollars as a result – is not the cause of Ontario’s debt problems. He points to the U.S. “Rust Belt” as evidence.

Even more telling, all the Rust Belt states, including Illinois and Indiana – which actually saw gains in manufacturing – have underperformed Ontario in overall growth over the past 15 years. While Ontario’s GDP grew at an average of 1.9 per cent annually between 1999 and 2013, the strongest Rust Belt state, Indiana, grew at only 1.3 per cent. Michigan’s economy, alternatively, contracted by 0.2 per cent annually over the time period. Examining this evidence, which shows the Rust Belt states have been able to control spending despite slow or even negative growth, Veldhuis concludes that poor spending practices, not fewer tax dollars from the manufacturing sector, has run up Ontario’s debt.

And according to both Velduis and McNaughton, at the heart of the Ontario government’s spending issues are its own workers.

Despite the continued increases in government spending on worker wages, a recent study found that in 2013, public sector employees already earned an 11.5 per cent premium over their private sector counterparts. In 2013-2014 employee compensation made up 52 per cent of Ontario government program spending, up 1.5 per cent from its share in 2005-2006. Over the time period, compensation per government job was up 11.9 per cent after adjusting for inflation.

Despite the growing expense of its workers, the government has been making strides to stimulate growth in manufacturing as well.

“Since the end of the ‘90s the government has come out with all kinds of tax policy [and] grant programs with two ideas in mind.” Pupatello said. “One is to help the companies who are already here to grow – which is where 80 per cent of the new jobs come from – and then some focus on attraction of those from outside our boundaries.”

Among a wide range of federal and provincial incentives are Ontario’s Strategic Jobs and Investment Fund, the Southwestern Ontario Development Fund and the Eastern Ontario Development Fund. Overall, the Ministry of Economic Development, Employment and Infrastructure said it has invested more than $1.6-billion to support Ontario manufacturers since 2004. Minister Brad Duguid said the province is working hard with the “sector, workers, and other levels of government to create and to retain manufacturing jobs.”

Investment dollars have been flowing from both the federal and provincial governments in other ways as well. Most notably, the $13.7-billion loan extended to General Motors and Chrysler in 2009.

According to Pupatello, one area in which the government needs to improve is how it attracts new investments.

“Other jurisdictions who have longed to have the industry we have in Ontario have stepped up their game significantly in the last decade,” she said. “They have become the aggressor on the world’s stage to actively chase investment.”

Referring to countries such as Mexico, which has built a strong manufacturing sector in the wake of free trade agreements in the ’90s, Pupatello thinks Ontario needs to do a better job selling its mature market and established transportation system that set it apart from other jurisdictions. The province’s stable environment, free from serious labour strife, nationalization fears and cartel violence are also strong marketing features the province could use to its advantage.

In spite of Ontario’s strengths, Veldhuis sees high electricity prices and a mounting debt as two areas that have become extremely detrimental to Ontario’s investment climate.

“When I look at Ontario, I see an unstable fiscal outlook, which is hugely worrying for investors, I see taxes on business and labour that have increased significantly, I see labour laws which have been made more bias and less balanced. I see electricity prices which have been made some of the most uncompetitive in North America. So on all the major pillars of what drives a positive investment climate, Ontario has unfortunately gone the other direction,” Veldhius said.

With the commitment to eliminate its budget deficits in the next few years, however, there are some indications the Ontario government is ready to turn the corner on its debt. Nevertheless, whether or not the province quits pointing the finger at manufacturers and begins to address high public payroll, remains to be seen.