Neutrons have many applications in scientific and medical research 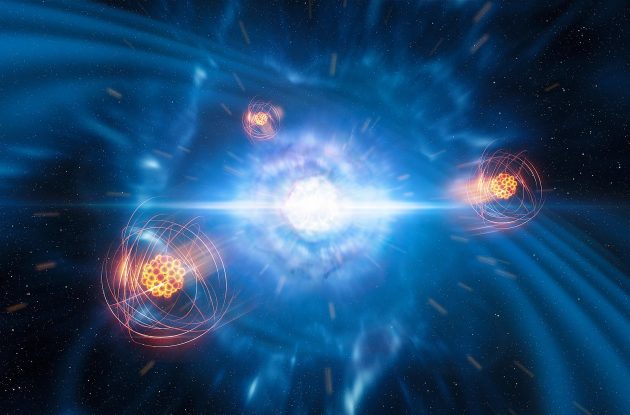 A team of European researchers, using data from the X-shooter instrument on ESO’s Very Large Telescope, has found signatures of strontium formed in a neutron-star merger. This artist’s impression shows two tiny but very dense neutron stars at the point at which they merge and explode as a kilonova. In the foreground, we see a representation of freshly created strontium. PHOTO: hor ESO/L. Calçada/M. Kornmesser/ Wikimedia Commons

Technological progress owes much to our scientific understanding of the materials we use to build the world around us, from longer-lasting cell-phone batteries to new medicines.

Scientists and engineers rely on a full suite of tools to understand the properties of materials at the atomic and molecular levels, and they use various probes such as visible light, lasers, ultrasound, X-rays, electrons and neutrons. Each tool reveals certain properties of materials, generating knowledge that guides to better understanding and improvements.

Neutron beams are among the most unique, and are used to study materials and processes at the subatomic level. Neutrons are one of the constituent parts of all atoms and, together with protons, form an atom’s nucleus. They offer unparalleled sensitivity to light elements and magnets and because of their unique penetrating properties they can provide clear images of the interior of objects without disturbing them.

Scientific study using neutrons requires a sufficient quantity to be produced by specialized, large-scale laboratories. Canada has been a pioneer in this field, and the majority of that research — more than 120 research papers per year involving 250 Canadian researchers — emerged from the National Research Universal Reactor (NRU) in Chalk River, Ont. However, the NRU was shutdown in 2018, bringing a lot of scientific progress to a halt.

Lack of access to neutrons is deeply felt by researchers in Canada, but this is not a unique problem. Globally, many neutron sources are at the end of their life cycles, and some have recently shut down. This resource vacuum presents a unique opportunity for Canada.

Canadian scientists are now carving out a new national neutron strategy to rebuild Canadian capacity for research with neutron beams. Immediate and short-term plans are currently underway, such as partnering with foreign neutron sources and using the McMaster Nuclear Reactor to its full potential.

New neutron sources will bolster Canada’s leadership in nuclear science and technology in the long-term. Compact Accelerator Neutron Sources (CANS) are alternative neutron sources, and they are gaining traction in the global scientific community.

CANS can be built and operated at a lower cost and, since they do not use fission, there is less regulatory hassle. This facilitates the construction of CANS in locations such as a university campus, making neutron beams significantly more accessible to materials researchers and opening new frontiers for Canada such as using neutron radiation for cancer treatments.

As researchers, we have three very different uses for neutrons. Drew Marquardt, a biochemist, uses neutrons to investigate the structure-function of cell membranes. Zahra Yamani is a physics scientist who researches quantum and other emerging materials, those materials in innovative technologies. As a radiation oncologist, Ming Pan uses neutrons to treat cancer.

Our proposed CANS consists of three major components: a proton accelerator, a target-moderator assembly that makes the neutrons and neutron beamlines leading to instruments for research, industrial use or medical treatments.

The beauty of CANS technology lies both in its lower cost — compared to other types of neutron sources — and its versatility. Although highly promising in principle, there have been relatively few attempts to implement a multipurpose CANS on a useful, practical scale. Researchers in France, Germany and Japan are pursuing CANS technology for various applications.

Applications of CANS vary from the study of new materials to novel cancer treatments. This is where Canada can once again take the lead by developing a neutron source capable of enabling various activities in one facility: from teaching and faculty-led research to medicine.

Recently, we have initiated efforts to design such a CANS that can service the broad scope of applications required by Canadian researchers and physicians. Our initiative seeks to do something no CANS has done: we intend on servicing both medicine and innovative materials research with one state-of-the-art facility.

Boron Neutron Capture Therapy (BNCT) is a targeted radiation cancer therapy whereby the neutrons react with boron that has accumulated in tumors. The neutron-boron reaction produces a form of radiation within the tumors to the cancer cells from within. Having the ability to target and destroy cancer cells while leaving neighbouring healthy cells intact, BNCT promises to be effective against many forms of cancer. The CANS being designed would facilitate the first national BNCT centre in Canada, making it one of only a handful of such centres designed for patient treatment globally.

Our proposed CANS is intended to provide neutrons to Canadian researchers for their innovative materials research in addition to medicine. We will build instrumentation that will facilitate research of “soft materials” ranging from how bacteria become resistant to antibiotics and how new anti-cancer agents’ function to key questions from the food industry relating to the nanoscopic makeup of milk.

The neutron imaging instrument at our proposed CANS facility can serve a variety of applications, from investigating imperfections in engine blocks and turbines to studying water uptake in novel crop strains or the interior contents of archaeological artifacts.

We are employing a new approach to deliver neutrons to investigators both in medicine to treat disease and in materials research all using the same facility in a cost-effective way. Our efforts are the first phase in a longer-range program to develop such a compact accelerator-based neutron source. It is time for Canada to — once again — demonstrate leadership in research.